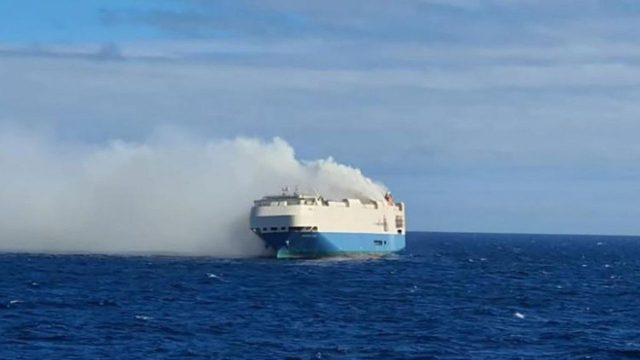 More than 4,000 Volkswagen, Porsche, Audi, Lamborghini and Bentley models are aboard the Atlantic Ocean.

A huge car ship that regularly delivers Porsche, Audi, Bentley, Volkswagen from Europe to the US is on fire and is adrift in the Atlantic.

According to an internal e-mail from the Volkswagen Group, obtained by Bloomberg, there are 3,965 vehicles on board heading to the United States.

The ship is more than 1600 km off the coast of Portugal, and its crew of 22 people has been safely evacuated to other ships.

The boat left the German port of Emden on February 10 and was scheduled to arrive in Davisville, RI on February 23, according to a post on Marinetraffic.com. More than 100 of the vehicles on board were heading to the Port of Houston, Texas.

Read:  Sony's electric car, closer to reality: Tesla could be the alternative

Felicity Ace, 200 meters long and 30 meters wide, was built in 2005 and sails under the Panamanian flag, according to the site.

The crew was not injured

A Volkswagen Group of America spokesman said the company was “aware of an incident involving a third-party cargo ship carrying Volkswagen Group vehicles across the Atlantic.” The ship was on its way to North America. We are in touch with the shipping company to get more information about the incident. “

In a statement sent to E-mail, Porsche said: “Although it is too early to confirm what happened and the next steps, we – together with our colleagues at Porsche AG – support our customers and dealers as best we can. to find solutions. Anyone concerned about this incident and the implications for the car they ordered should contact their Porsche dealer. ”

Read:  A new Netflix series on the horizon: Toni Collette's role in Pieces of Her promises to be truly special

The incident could have long-term effects on stocks already depleted for US VW Group brands. With the exception of the Q5, Audi produces most of its vehicles to the US in Europe.

Lamborghini would also have on-board vehicles, as would the Volkswagen brand – although VW’s impact would be limited to the Golf R and GTI Arteon and ID4s.

This is not the first time the VW Group has lost goods at sea. When Grande America caught fire and sank in 2019, more than 2,000 luxury cars, including Audi and Porsche, sank with it.