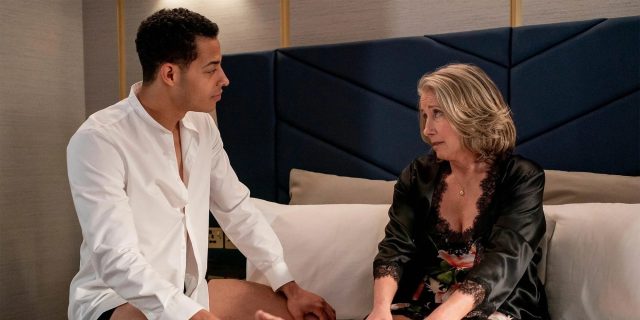 Good Luck to You, Leo Grande is a new film in which we can see the well-known actress, Emma Thompson, playing a unique role, out of the ordinary.

Emma Thompson plays the role of a widow without much sexual experience, and this we can see the new trailer of the romantic comedy Good Luck to You, Leo Grande, published in the footer of this article.

Directed by Sophie Hyde, whose previous credits include 52 Tuesdays and Animals, Good Luck To You, Leo Grande is written by Katy Brand and tells the story of Nancy (Emma Thompson), a retiree who hires a young sex worker named Leo Grande for enjoy a night of sexual self-discovery.

Read:  Netflix brings something completely new and interesting: what you can see on the streaming platform

Starring Daryl McCormack, who we also know from Peaky Blinders, the film is scheduled to be released by Hulu on June 17. On the same day, the comedy will also be released in cinemas in the UK.

Good Luck to You, Leo Grande, a film in which Emma Thompson “will push her limits”

As can be seen from the trailer released by Hulu, the film will be a story full of warmth and will not lack funny components. Nancy is clearly an interesting character, who asks a lot of questions to Grande (McCormack) and openly states that “there are nuns with more sexual experience than me.” Grande, on the other hand, seems to be a cool, calm and collected guy who easily copes with Nancy’s way of being, although there are clearly a few hidden facets of the character that the film will explore.

In general, the comedy Hulu presents as a new version of a formula that has worked in the past. This may be one of Thompson’s most interesting roles, but of course that remains to be seen in the film to convince us.