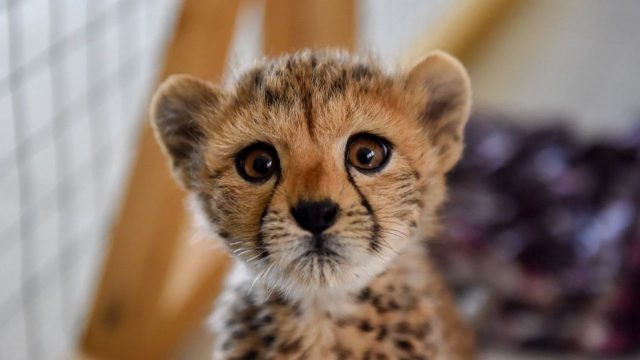 You may already know that cheetahs are the fastest land animals in the world. But you may not know that at one time they were considered a sacred symbol and resembled royalty.

In the top below you will find 10 of the most interesting and unknown things about these endangered animals.

1. The fastest land animal on the planet is built for super speed, rather than endurance

A cheetah chase usually takes less than a minute and the distance is only 200-300 meters. At full speed, the cheetah takes three steps per second, covering seven meters per step! So it is not at all surprising that he gets tired quickly and saves his energy most of the time. One study found that cheetahs spend only 12% of their day moving.

2. Cheetahs can accelerate faster than most sports cars

I can go from zero to 100 km / h in just three seconds! Their claws work more like football cleats for better grip when sprinting, while their long, muscular tail acts like a rudder, helping them make tight turns as they chase their prey.

3. The name cheetah comes from a Hindi word, chita, which means “stained”

Their spots are unique to each feline and help with the camouflage needed for hunting. But not every cheetah has spots. In rare cases, a certain gene produces a fur with spots that fade into their stripes. These so-called “king cheetahs” may not look like the rest of the cats of the same breed, but they differ in only one gene.

Read:  Game of Thrones and HBO's "civil war": how House of the Dragon was born

4. Cheetahs have a unique social life among cats

Females are solitary, while males live together. Usually, a female raises her pups alone, hiding them in the burrows during the day and teaching them her hunting skills as they grow. Male cheetahs team up with their siblings or other males to form “coalitions” – groups that defend common ground and attack larger prey.

5. Unlike most cats, the cheetah hunts mainly during the day

With a much sharper view than a human, it can detect prey from a distance. It is believed that the distinctive black “tear marks” on the eyes of these cats help to reflect the brightness of the sun. Being active during the day also reduces the risk of losing prey to nocturnal predators such as lions or hyenas.

6. Don’t expect a cheetah to roar

Cheetahs lack a special neck bone, which allows other large cats to do so. But cheetahs can make other sounds, including squeaking, chirping, hissing, or squeaking.

7. In ancient Egypt the cheetah was considered sacred and a symbol of royalty

The cheetahs were kept as hunting companions by the pharaohs and represented on the statues and paintings in the tombs. The ancient Egyptians believed that a cat goddess named Mafdet, often depicted with a cheetah’s head, would hasten Pharaoh’s soul to the afterlife.

Read:  Barack Obama gives you ideas if you don't know what else to watch: the former US president's favourite films in 2022

While some groups of cheetahs live on a small area of ​​30 square kilometers, in other areas a cheetah can roam a large area of ​​3,000 square kilometers. These cats look for areas where other predators are less common, avoiding competition with larger predators. Habitat loss, mainly due to human expansion, means that areas that were once home to thousands of cheetahs can now support only a much smaller group of these cats.

The wonderful appearance and reputation of the cheetah fuels the latest threat to its survival: illegal trade. The demand for cheetahs as pets means that the chicks are often taken from the wild. It is believed that only one in six chicks survives trafficking. There is hope, however: in the Convention on International Trade in Endangered Species, 180 countries have supported measures to restrict trade!

10. Cheetahs could run to extinction

Cheetahs were once widespread in Africa, as well as in the Arabian Peninsula and eastern India, but recent research has shown that these cats are now found in only 9% of their historical area. More than 90% of them have disappeared since 1900, and the global population is estimated at less than 8,000 species. The Asian cheetah population now numbers only 50 animals, in an isolated area of ​​Iran.