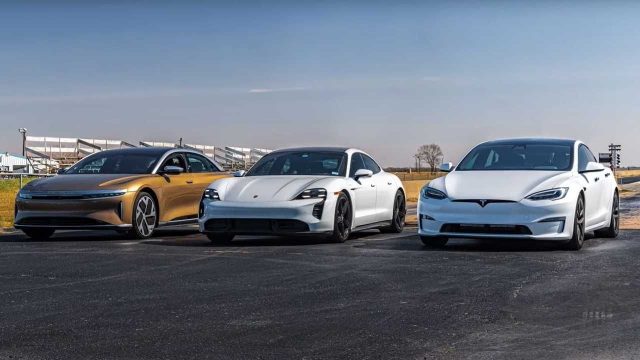 Victory is not just about raw power.

Now is your chance to see how three of the best electric cars do in a straight race. DragTimes continues the series of straight-line races, so after Tesla vs Lucid they organized a three-way race between Tesla Model S Plaid, Lucid Air Dream Edition and Porsche Taycan Turbo S.

As you can see in the clip below, power matters to some extent – and the result doesn’t tell the whole story about any of these cars.

You may not be surprised to hear that the Model S Plaid came out triumphant. This is a very interesting thing considering the fact that in the previous race Lucid managed a stage victory out of the four.

Read:  Problems for Tesla: What the manufacturer is facing now

The battle of the titans

Tesla’s premium sedan comfortably won all three races, pulling firmly ahead of Lucid Air and even further ahead of Taycan. Lucid Air has 1,111 hp, most of the horsepower in the group, but its heavier body requires more effort to move. Taycan had no chance – its power of only 750 hp and a weight of about 2 tons placed the German model only in third place.

Power-to-weight ratios were not everything, however. Air’s performance may be more impressive than it looks because it doesn’t have a launch mode. And, as many enthusiasts will point out, a straight race is not the only benchmark for a car’s performance.

Read:  Scream 6 has become a certainty: when filming for the new movie begins

It’s no secret that Taycan is one of the best electric vehicles in its class and could be your choice if you are more likely to drive a winding mountain road than a straight kilometer.

In other words, this clip is just a reminder that no luxury electric sedan can make everything perfect.