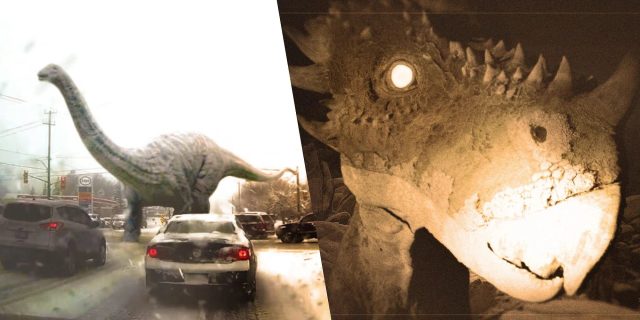 A new interactive website, created in honor of Jurassic World Dominion, provides you with videos, images, locations and details about the upcoming sequel to the famous dinosaur franchise.

Dominion is the end of the Jurassic World trilogy and is directed by Colin Trevorrow. The cast includes Chris Pratt, Bryce Dallas Howard, as well as classic Jurassic Park actors like Park Sam Neill, Laura Dern and Jeff Goldblum.

In honor of this production, enlightened minds have set up a site that is meant to instill fear in you, if you dare to take a look at the map.

Dino Tracker, the site that shows you how close you are to a dinosaur

On Dino Tracker, a new interactive website designed for the launch of Jurassic World Dominion, users can view a map of the world, showing the geographical locations of different species that have spread over the past four years since the events of Fallen Kingdom. Each location highlights a photo or video, presented as recordings captured by people accustomed to their smartphones or even so-called surveillance cameras.

Read:  Audi and Netflix have teamed up for their newest film: What cars you can see in The Gray Man

The tactic is, without a doubt, a clever combination of media that serves as an advertisement for Dominion, offering a perspective on the spread of dinosaurs around the globe, since the last movie. The site also highlights the most common species, including Brachiasaurus, Triceratops, Pteranadon, Compsognathus, Ankylosaurus, Gallimimus, Apatosaurus, Stegosaurus, Carnotaurus and more.

Obviously, we are talking about a special marketing tool, meant to put Jurassic World Dominion on the movie map; not only does it provide insight into what the world looks like four years after Fallen Kingdom, but it also gives the house some details about the story, enhancing the enthusiasm of those who want to go to the movies and see the movie.

Read:  Netflix fixes what has ruined Hulu: Pamela Anderson will tell her story in a new documentary

As an additional detail, the species of dinosaur closest to Romania is Apatosaurus, a family of such craters being observed in the immediate vicinity of Vienna.

Jurassic World Dominion will be available in theaters starting June 10, 2022.