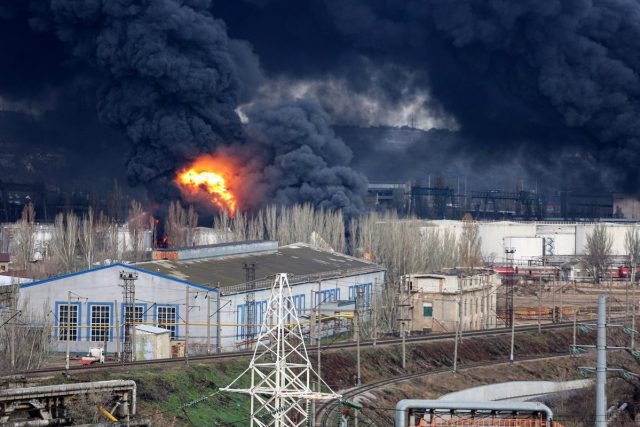 At least one dead and five injured in a missile attack on a shopping center and a product warehouse in the city of Odessa, the Operational Command in southern Ukraine reported on its official Facebook profile.

“Obsolete missiles have managed to penetrate a shopping center and a warehouse for consumer products,” he said, adding that “the enemy continues to attack civilians and civilian infrastructure” in the city.

Throughout the day on Monday, and throughout the night, Odessa has been attacked with at least seven missiles and several fired from the Crimean peninsula, controlled since 2014 by Russia, according to local authorities.

Before this attack on the shopping center and the warehouse, the Odessa City Council has reported in its Telegram account the impact in the region of at least four Onix missiles, one of the most modern high-precision projectiles that the Forces have. Russian navies.

Later, the spokesman for the Operations Headquarters of the Odessa Regional Military Administration, Sergei Bratchuk, reported that “already at night”, Russian troops attacked the region again.

“The enemy continues to launch missile attacks on the city and the region, trying to destroy the infrastructure. We thank the air defense forces for their combat work,” Bratchuk reported on his Telegram channel.

For its part, the Odessa City Council has detailed that the air attack has been carried out with ‘Dagger’-type missiles launched from ‘Tupolev Tu-22’ model bombers and has regretted that at least two people have been taken to hospital, in addition to that five tourist buildings have been destroyed.

The area was attacked on Sunday with cruise missiles fired from the Black Sea. For Russia, controlling the southwestern part of Ukraine would mean establishing a corridor from the Donbas region to Transnistria, a breakaway region in eastern Moldova.

Over the weekend, there have also been shellings in other parts of the country, such as in the town of Popasna, where, as a result of shelling in the Lugansk region, critical infrastructure in Belogorov and Severodonetsk has been destroyed.

Thus, the Vodokanal company, which ensures the supply of water to the area, has had to interrupt its service, according to the head of the regional military administration, Sergii Haidai, as reported in a statement on Monday by the Ministry of Reintegration of the Temporarily Occupied Territories.

In addition, throughout the day this Monday, the Novoslobidska and Vorozhbyanska territories, in Sumy, have registered attacks, as reported by the head of the Sumy regional military administration, Dimitro Zhivitski, as reported by the news agency ukrinform news.

Likewise, air alarms have also sounded in Dnipropetrovsk, according to the regional state administrator, Valentin Reznichenko, who has said that in the town of Zelenodolsk several houses have been damaged by the bombing.

The Ukrainian Prosecutor’s Office has explained in its official Telegram profile that a violation of the laws and customs of war is being investigated because the Ukrainian authorities have found the body of three civilians who have been shot in the head in Makariv, in the Kyiv region.

In the context of all these attacks and events, the UN Human Rights Council will discuss on Thursday, at the request of kyiv, in a special session the deterioration of the situation in the country, an initiative that has been supported by 53 countries, according to the DPA news agency.