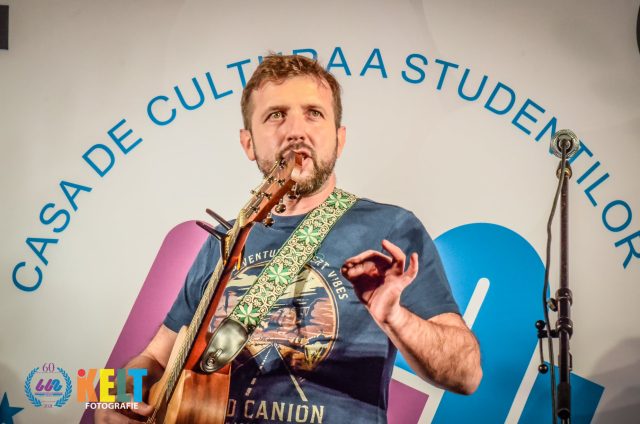 There is no Romanian, listener of music, in this country, who has not heard, at least by chance, of “Fără Zahăr”, ​​the project founded by Bobi Dumitraș and Bobo Burlăcianu, that is, the two nice and eternally funny boys from Dorohoi .

“Sugar Free” was born out of the desire of some people to translate their humor into music. In 2003, Bobi and Bobo sent a sample of their creation to record labels and managed to get the attention of the public across the country, ticking off a wide range of people. In other words, whether you were listening to Dimmu Borgir or Andre, you couldn’t help but know the lyrics by heart: “I would love you, if you wanted, my dear. yard / To plow me (you know) two or three acres / Because you see (see… see bathrooms) its big weed ”.

The latest album is called “Bitter Comedy” and was released as a self-release in 2020.

Bobi Dumitraș, the band’s co-founder, also a stand-up comedian, agreed to give us an interview, in which he told us about the beginnings of the band “Sugar Free”, but also about its present.

Interview with Bobi Dumitraș, the man responsible for the “breaks” between the songs Fără Zahăr

“I don’t know how others are” (another famous Moldovan, apart from you) and the revived music station, Atomic TV. I remember that at that time, there was not a day in the week when I didn’t see, at least five times, the video for the song “Sandu”. That being said, how hard was it for you to break through Atomic TV, in a world where all the speakers were rumbling to the max Andre or 3 Sud Est? How long was the road to celebrity, and especially how hard?

Bobi Dumitras: You know the phrase “good luck with the cart”, right? That’s what happened to us, the lucky car. In 2003, Zone Records released one of the strangest, worst-recorded, and funniest demo records in the mail. We hoped, we wanted each other enormously, we knew there was something good in us, but we were also mentally well prepared to never receive an answer from these arrogant and superficial Bucharestians. But here that the humane, kind and attentive people from Bucharest answered us and welcomed us with open arms. The poisoning of the country with “Sandu” was their hand. In short, the road was neither long nor difficult, we just had the chance to go straight through the corn.

Read:  BMW is relaunching a well-known model: when will you be able to buy the new X7

Do you remember the first recording equipment you used and how much it cost you?

Bobi Dumitras: I believe in the division of labor and in not investing in professional equipment that you use infrequently or without expertise, so if I want to record something I go to a studio and, together with Bobo, we make the producer think Too bad he got us. Joke aside for five seconds, we really like to call on people who do just that and know how to do it. The most recent studio I entered I think had tools of about 30k euros.

Every time I come to your concerts I find that the show location is so full that people would be on stage with you, if the organizers let them. Without a doubt, you are the most successful band in your niche. What do you do differently from others?

Bobi Dumitras: I talk a lot, I argue with the world, and Bobo has a beautiful, chameleon-like voice. We probably manage to break that imaginary curtain between the stage and the audience. Sure, other artists do it, but we may do it more eagerly.

Bobi Dumitras: For years, we terminated the contract with Roton in a totally friendly way, because we could no longer find ways to help each other mutually advantageous, people being bent, as is normal, towards commercial success. We still have good communication with them, because there are still publishing contracts in place for the first three albums. The album “Comedie Amăruie” is, in turn, released with a production house, but it is a small and nice one, by a friend, without extensive financial implications. He just ordered the print run and put it in my arms: “No, Dumitraş, do it!”

Read:  Renault has finished the AvtoVAZ soap opera: what is happening with the Russian giant

I’ve noticed that from time to time you can’t help but press the rock pedal. Please tell, whats the story of them big puppys …………..

Bobi Dumitras: Only one, yes? Keep shining, crazy diamond. In the case of the other, I would whisper in Freddie’s ear when, coming down from the fixed-time car in his living room, I would prevent him from writing, but from printing Rhapsody, I would steal it and say it was mine.

Beyond your activity at Sugar Free, people know you from stand-up shows. In fact, those who come to your concerts have the opportunity to hear, between songs, and some samples of your humor. If tomorrow you should, by absurdity, choose between music and stand-up, what would you choose and why?

Bobi Dumitras: I would choose the music, because the break between the songs is only mine and I can say all the nonsense in the world.

I would ask you how the pandemic affected you, but I already know the answer to that question. So, I’m going to open a topic that is currently entrenched: refugees in Ukraine. I saw that you were recently involved in a project to help mothers and children who came from this country to us. Can you tell me more about this? Will there be such actions in the future?

Bobi Dumitras: The artist doesn’t need money in his pocket to help. It can act as a bridge of awareness and relationship between those who want to donate and those who know where to take the fragments of goodness given. Actually, I took their money and redirected them, and they chose a big smile, wider than their hand, so they made an emotional profit. We will definitely do more, because Romanians are good and empathetic. Yes, even the people of Brăila.