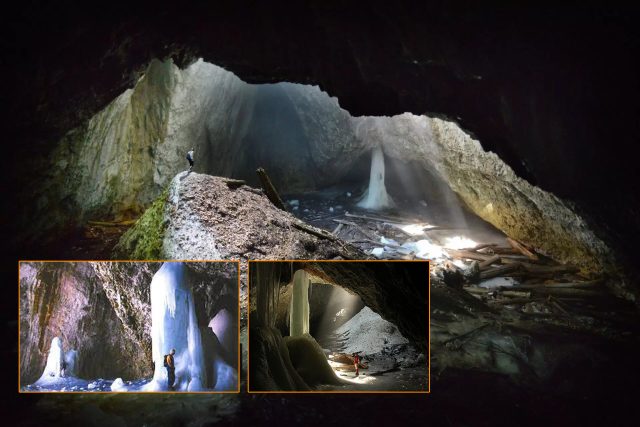 The Living Fire Cave is one of the most fascinating places in the Apuseni Mountains. Find out why the cave is named after him.

The Apuseni Mountains are home to what can truly be called a treasure, the Cave of Living Fire. It is located in the Bihor Mountains, on the Yellow Valley, about 500 meters from Piatra Galbenii Peak and Cucuelul de Fier Peak.

The cave consists of two rooms, and access is by a wooden staircase. The Great Hall has a height of 46 meters and a length of 68 meters, housing a glacier of 25,000 cubic meters. This is the third largest in Romania.

After the Great Hall, visitors can see groups of stalagmites on which the sun’s rays deviate, creating an impressive natural spectacle. Due to these reflections, the name of the cave was given, namely the Living Fire.

The Living Fire Cave is said to have housed Decebalus’ treasure

After the stalagmite formations is the gallery leading to the Small Hall. In turn, it has such formations. According to older writings, the cave was formerly called the “Eskimo Cave.” Several legends were born based on this cave. According to one of them, the treasure of Decebalus, which was guarded by a few giants, is said to have been here in the past.

“It is a small cave, consisting of two rooms, the first and largest being occupied by the huge block of ice. Its ceiling is broken by a large window through which fell logs, leaves and snow from the outside, which formed a large mound. Sufficient light penetrates through the ceiling of the cave to reveal the groups of ice stalagmites on the opposite side of the cave entrance.

In fact, around noon, the sun’s rays enter through the window creating an enchanting setting. The explanation for the existence of the ice block in the cave is given by two elements: the window in the ceiling favors the accumulation of cold air, and the lack of ventilation in the cave keeps the cold air captive all year round “, the description of the cave on the Apuseni Natural Park website shows.

Cheile Galbenei reservation is a limestone formation located in the northern part of the Bihor Mountains. This area extends to Valea Galbenei and is also known as Poiana Florilor.

To get here, you have to go on DN 76 which connects Oradea and Deva, and at Sudrigiu turn left towards Padiș. Another way to get here is from Arieșeni commune. Thus, from the center of the village you can go on the paved road, climbing the Cobleș valley, to the village of Cobleș. At the village store you have to go to Valea Gojii, and then go down to Valea Luncșoarei until you enter Cheile Galbenei. Further on, go to Poiana Florilor and reach the Focul Viu cave.