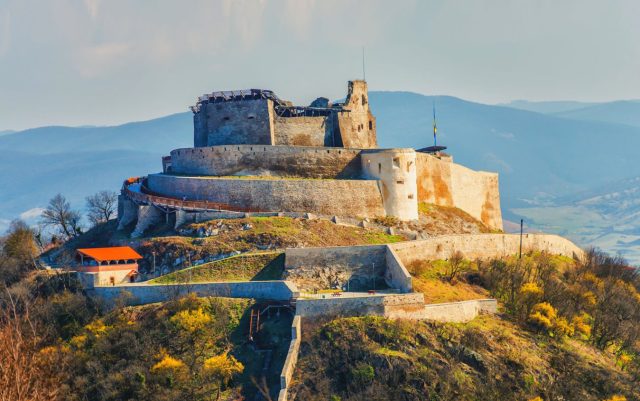 The fortress of Deva continues to be shrouded in mystery, especially since it is a secret tunnel that would lead to the Corvin Castle. Find out all about the mysterious gate that would make the underground connection.

A locked and barred gate forbids access to what appears to be a darkened room under the cliffs on Deva Fortress Hill, the volcanic cone on which the medieval settlement was built.

Thousands of tourists often pass by this place when they visit the fortress, reaching the First Gate of the impressive medieval place. At the end of a long line of stone steps begins the path that leads from Ștefan Octavian Iosif Street, near the Citadel Park and the Magna Curia Palace.

At the top of the stairs, tourists heading to the right must cross a 10-meter cave, which was dug into the rock. After crossing this small tunnel, they have to climb through the forest on the Citadel Hill. This mysterious cave is close to the entrance to the fenced gallery.

Read:  Dacia with a million kilometers on board is sold with a small fortune: what is its story, how much does it cost

Deva Fortress would hide a tunnel to Corvin Castle

Just a few meters above you can see the vent of another room that is dug into the rock, but built almost entirely. But the two rooms also have a story, and too few know about it. A legend about the rooms shows that the tunnel connected the Deva Fortress to the Corvin Castle, but this does not appear in the documents.

The gallery that was excavated hundreds of years ago would have started from under one of the rooms of the castle or right next to the monument on Sânpetru Hill and facing the Deva Fortress. The story also shows that the tunnel was dug by the Turks taken prisoner.

It was used for the army to move in order to defend both the castle and the fortress. Although archeological research has taken place over time, scientists have been unable to trace a tunnel between these buildings.

Read:  Top 5 movies you wouldn't expect to be based on real facts

Another legend says that this gate is an old entrance to a mining gallery that operated under the Deva Fortress, given that several such exploitations took place in the area. The administrators of the Citadel state that this room belongs to the seismic observatory in the vicinity and aims to detect and locate earthquakes.

Previously, during World War II, there was an anti-bombing shelter here. Deva Fortress was built seven hundred years ago on a volcanic cone. It was inhabited until the 19th century, when there was an explosion in the ammunition depot, turning the fortress into a ruin.