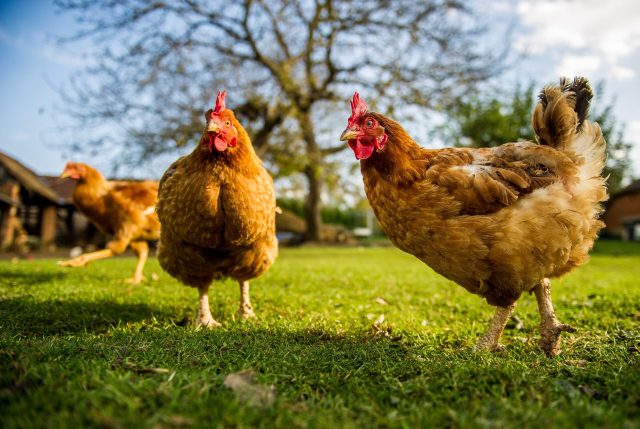 By the time humans began to domesticate animals and use them for consumption, almost all individuals of entire species lost the right and opportunity to live their lives as nature had built them for them. Thus, the red jungle hen, which initially lived in the wild and was adapted to that way of life, was captured and multiplied selectively over time to best serve human consumption interests. Here are ten amazing things about … chickens!

Although we have lived with animals around us for thousands of years, we still know so little about their behavior and more. Scientists continue to discover countless new information about wildlife as well as domestic animals. Here are some things you probably didn’t know about chickens, among the most common poultry.

1. Hens appreciate personal hygiene, and for this purpose they take sand baths to keep their feathers clean and parasites at bay. The lack of the possibility to go to the toilet causes them discomfort as much as it would cause us.

2. One of their favorite activities is searching for food. Grounding is both a play and a necessary and enjoyable physical activity for chickens.

3. One of their instincts is to build a nest for rest and shelter. It is easy to understand why forced living in cages in halls, where the light almost never goes out, along with tens of thousands of other chickens, is a reason for constant disorientation and stress.

The natural reflex you wouldn’t have thought of

4. Nibbling is a natural reflex for chickens, a reflex that they also cannot practice, as in many of their farms their beaks are cut off to prevent cannibalism caused by depression caused by living conditions.

Read:  Law changes for all drivers in Romania, in 2022: the change that saves you from terrible stress

5. Another natural instinct specific to them is the perch. The hens manage to fly for a few seconds to reach tall trees or bushes, thus protecting themselves from predators. The cages, the crowds and the conditions in the industrial halls do not even allow them to spread their wings, and the problem of flying or perching cannot be raised.

6. Another characteristic attribute of a hen is the need to socialize, preferring to live in small hierarchically organized herds and loving affection when treated with respect. They use different sounds to communicate their messages, such as finding food. They are also empathetic animals, showing suffering when a member of the herd dies.

7. Their intelligence has been a topic of interest to researchers, so it has been shown that they have a developed cognitive ability, comparable to that of puppies and cats, animals that humans respect more. The hens distinguish the moments of the day by orienting themselves according to the position of the sun, are self-aware, experience REM (Rapid Eye Movement) during sleep, dream, can orient themselves in space, have good eyesight and can see, thanks to the extra cone they have. have, ultraviolet light. They have mathematical skills and good memory, being able to distinguish and recognize over 100 faces, even from other species.

Read:  The Batman continues to make waves in cinemas: what records has it broken

What is the life expectancy of a hen?

8. Family life is especially important for chickens, as they are dedicated mothers. When they hatch, they can spend days without feeding and without hydration if they feel unable to leave their eggs safely. Chickens would normally lay between 10 and 15 eggs a year to breed. However, they were genetically selected and modified to lay up to 350 eggs per year. The cruelty of the egg industry also means that they never get to know their own children, although, in nature, they communicate them through sounds even before hatching, in order to accustom the chicks to their voice. Contrary to popular belief, a hen in front of predators is brave when it comes to protecting her young and will do so at any cost.

9. Normal life expectancy would be around 10 years or more, but in industry hens raised for eggs live for about a year (unless they die due to the conditions) and those raised for meat do not exceed six weeks.

10. A rooster can court a hen by feeding it, but it will choose according to its own criteria. They eat grass for digestion and pull the thread in a manner similar to the way people pull spaghetti. Now, who knows what the famous scene from The Lady and the Tramp (1955) would have looked like if a rooster, a hen, and a blade of grass had been in the lead roles?