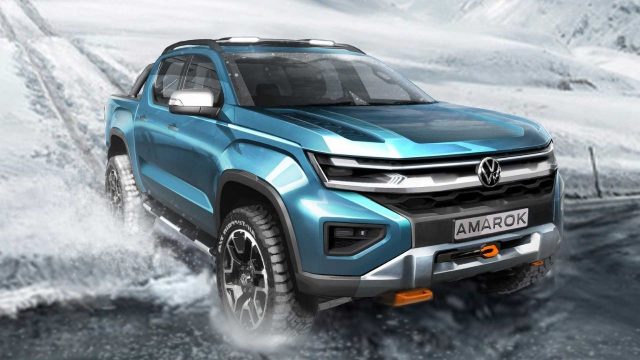 The second generation of the VW Amarok pickup will be launched this year, at the end of a complicated development process, which also included an intense collaboration between Ford and the Volkswagen manufacturer.

Ford and Volkswagen are not the first models developed together, but the new partnership between the two companies, concluded a few years ago, has brought to light, for the first time, a pick-up, a car from a segment in which Ford is the leader absolutely globally.

The images also suggest that the new Amarok will not be a simple copy of the Ranger, as it looks like the pair of medium-sized pickup trucks will only have common door models. Unique for both models will be the design of the wings and the treatment of headlights and grille, as evidenced by the images. VW said the new Amarok will be wider than its predecessor and almost four inches longer, measuring a total length of 5 meters.

Volkswagen has big plans for Amarok

The interiors will also be unique to both models, although it looks like the new Amarok will have a portrait-style infotainment screen, just like the new Ranger.

As for the engine, VW has so far only confirmed its own V-6 diesel engine, although we should see a few petrol units on offer, possibly borrowed from Ranger.

Ford will build the Amarok for VW at a factory in South Africa, the pickup being so far only confirmed for the markets of South America, Europe and Africa.

Read:  RCA capping, more useless than you think: why you will pay more, what are the criteria, the reference rates

Ford will use the platform for one or more electric vehicles, the first of which is a compact crossover to be launched in 2023.