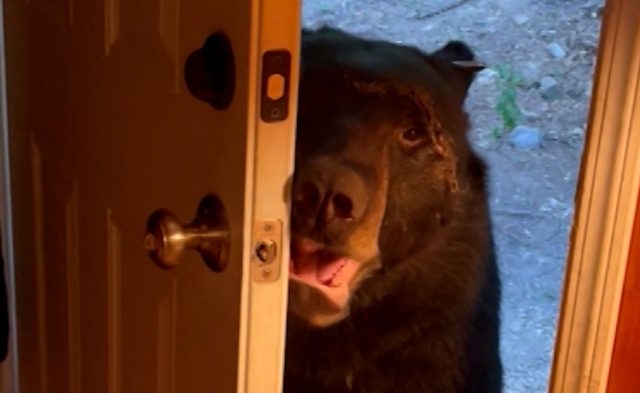 Wild animals often visit human settlements, something we know from Romania when they come down from the forests to find food. Well, there are more ‘well-mannered’ animals, so a bear opens and closes the door of the home it visits.

A video of a bear went viral after the owner of the house the bear crossed the threshold uploaded it online. Although you might not initially think it’s out of the ordinary, you find out that the bear in question is showing off his extraordinary elegance without leaving the door open.

A black bear came to visit a home in New Jersey, USA. The dexterous bear did his best and opened the doorknob with his mouth. In order not to show his lack of manners, the same bear thought the door should be closed backwards, which he did with his mouth.

Unprecedented footage of a bear visiting a home

The owner of the house is Susan Kehoe who captured the whole incident on video. If other people had drawn the fright of their lives to see the bear on their doorstep, Kehoe spoke to the bear as if it were a small child she was urging to leave the house.

Somehow, the owner of the house seemed to know that the gentle bear had not finished his show and asked the wild animal to close the door, which happened within a short time of her request. Susan Kehoe says she feels confident that she knows what to do and how to behave so that the bear doesn’t become aggressive and leaves the “human” side behind.

Of course, the woman’s confidence also has a good reason behind it because Susan is a biologist who studies black bears. The unusual moment has gone viral on the internet and shows a lesser-known side of the unspeaking world, according to CNN.