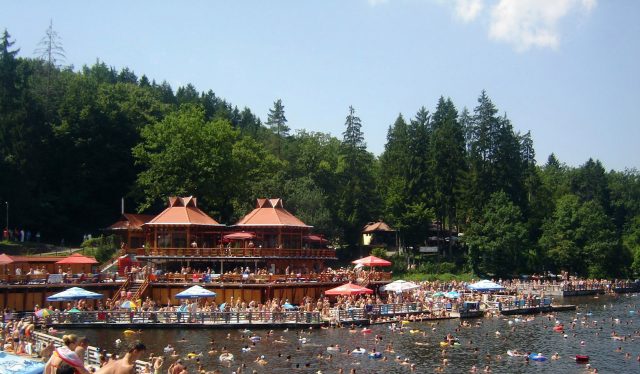 Romania is known for its breathtaking places, but the resort in Romania you’ve certainly never visited manages to offer more spectacular scenery than any other in Greece.

This place is unique in Romania and manages to attract thousands of tourists every year. Lake Ursu is also called the Dead Sea of Transylvania, and once you get here you will feel better than in Greece or any other place you have visited before.

This place is in the resort of Sovata, and the lake here is the only heliothermal lake in Europe. The lake measures 40,000 square metres in area, has a depth of 18 metres and a salinity of 300 grams/litre.

This heliothermal lake has the highest concentration in the world, and its salinity is similar to that of the Dead Sea in Israel. The lake is unique in Europe, and the natural phenomenon here is that the salt water is protected by a protective layer of fresh water.

“The saline concentration is highest at the base of the lake, as well as at a depth of 1.5-2 m. This mesothermal layer has the highest temperatures, reaching 45 degrees Celsius and above in summer. Also at this depth there is the maximum concentration of estrogen and progesterone hormones similar to human female hormones, released into the lake water by the saltwater crustacean Artemia salina”, said balneologist Suzana Pretorian for adevarul.ro.

The Romanian resort that is unique in Europe

Scientists have determined that Lake Ursu was formed in 1875, on 27 May, taking the place of an old pasture. In the past, two streams flowed through the lake and disappeared into a hole in the salt mountain.

Read:  BMW XM: the most powerful M model ever launched

Its name comes from its shape, being similar to a bear’s fur. The lake’s properties attract thousands of tourists annually who come to solve their health problems. In addition to the wellness features, they also benefit from an ideal holiday area.