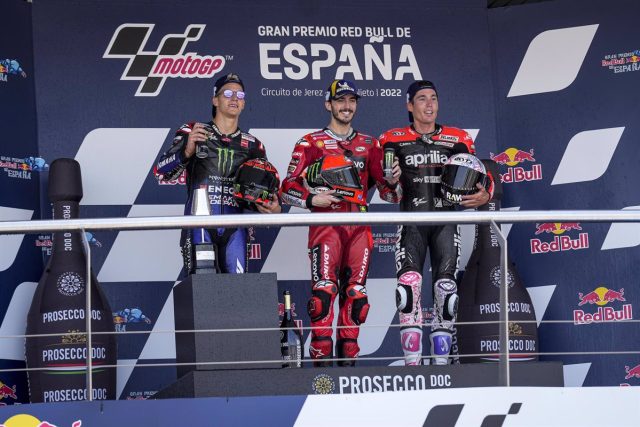 The Italian motorcycle Grand Prix that takes place this weekend in Mugello promises strong emotions in all three categories, since in MotoGP the recently renewed with Aprilia Aleix Espargaró and the local Enea Bastianini (Ducati) will challenge the leader Fabio Quartararo (Yamaha ), while in Moto2 Arón Canet seeks to assault the leadership that, in Moto3, is defended by Sergio García Dols.

The premier class is very tight after the first seven races. In a fist, in fact, with the 4-point advantage that the ‘Diablo’ has over Aleix Espargaró and the 8 over Enea Bastianini, which is confirming itself as the best Ducati despite being a satellite.

Somewhat further away are Alex Rins (Suzuki), 33 points behind, or Jack Miller (Ducati) and Johann Zarco (Ducati), both 40 points behind the Frenchman. All of them, plus a Francesco Bagnaia (Ducati) who is on the rise, the former champion Joan Mir (Suzuki) if he finds regularity or even a Marc Márquez (Honda) who continues to seek to return to ‘his’ normalcy of being in the lead, all of them, They will try to break Quartararo.

In the last race, the French Grand Prix, Enea Bastianini took the victory at Quartararo’s house, and now the ‘Devil’ will seek, despite the pressure of being singled out and persecuted by everyone, to return the coin in Mugello. And with Jack Miller or Aleix Espargaró motivated by their podium finish at Le Mans.

In addition, Aleix Espargaró and his teammate Maverick Viñales were renewed this Thursday with Aprilia Racing until 2024. An agreement to encourage both of them, especially the one from Granollers in their fight for the championship. A title that seems like a plausible reality, far from being the utopian dream that it was, even last year despite the improvement carried out by the ‘captain’ Aleix.

A year ago, at the previous Italian Grand Prix, victory went to Fabio Quartararo. A victory that, if he could revalidate it in 2022, would give him air, a lot, in the form of a margin of points and also in showing his rivals that he is still the strongest. Rivals emerging from under the stones.

Among them, a Marc Márquez who, although he is tenth in the general championship, 54 points behind his friend Quartararo, continues to improve and was sixth at Le Mans. At Mugello he has not won since 2014, but he did two second places in between. Last year he retired in the first round and in 2020 he couldn’t even run, injured. So he seeks to confirm his improvement and his return to the ring.

SPANISH POWER IN MOTO3 AND AUGE IN MOTO2

In the middle and small categories there will also be a battle, in this still starting World Cup. In Moto2, the leader is Celestino Vietti who races at home, but he has two riders like the Japanese Ai Ogura and the Spanish Arón Canet who have him within a shot of the Grand Prix.

Read:  Marc Márquez: "The mind is much stronger than any muscle in the body"

Canet, second in the French event behind Augusto Fernández, wants to follow Vietti’s chase and rejoin the fight, something he has been doing since Jerez, where he was also second only behind Ogura. That trio will play it in Mugello, although Tony Arbolino or Augusto Fernández himself will try to get into the ointment.

And, in Moto3, Spaniard Sergio García Dols (GasGas) is looking to recover from seventh place at Le Mans. Nine points added that made him lose cushion at the head of the World Cup compared to Jaume Masià (KTM), winner in that French event. And the 17 points that separate the two are the same that the Italian Dennis Foggia seeks to recover, tied for third with Masià.

Also the Spaniard Izan Guevara, teammate of García Dols in GasGas, is 23 points behind in the championship and could, with a carom, come out leader of Mugello. All this, in the usual madness of the small category, makes it impossible to know what classification will come out of the Italian event, where last year Foggia won, precisely, with Masià second and García Dols ninth.