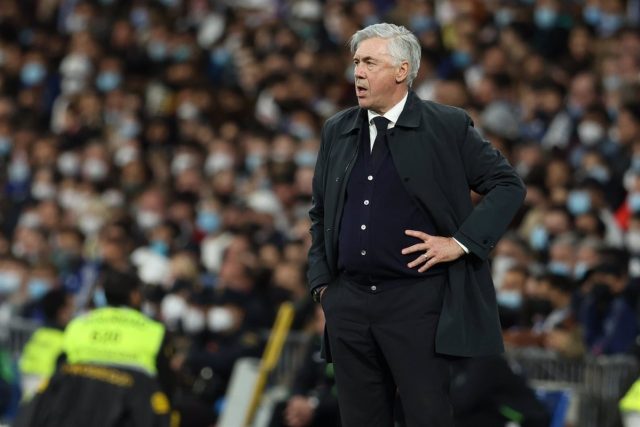 Real Madrid coach Carlo Ancelotti once again praised Karim Benzema, the “perfect representation” of the center forward in modern football and on whom he confessed that the team is “dependent”, at the same time as warning of the “difficult” game this Tuesday against Chelsea, although the white team “can compete” for this trophy, thanks to its “experience and personality”.

“There are two strikers who have stood out, Vinicius and Benzema, Cristiano Ronaldo and Bale did it before… And to say that we are dependent on Benzema is true, there is no need to hide it, and I am happy to be dependent on Karim,” the coach said. Italian at the press conference prior to the Champions League quarter-final second leg against the Londoners.

For Ancelotti, Benzema, who converted his second consecutive hat-trick in the Champions League in the first leg, represents “what a modern center forward should be”. “In the past he was the one who finished off the crosses and what happened inside the area. Karim is what modern football demands of a striker, not only shooting and scoring, but also helping the team, defensive work. He is the perfect representation of what who has to be a center forward in modern football”, he praised, when asked about his hypothetical harmony with Erling Haaland.

The Italian, who wants to avoid any type of relaxation for tomorrow, warned of the difficulty of the match, for which he urged “to play a complete game”, knowing that “you have to suffer and compete”. “We have to plan the same match as for the first leg, bearing in mind that we expect a rival who is going to do their best to try and win the tie,” he added.

Read:  Mané: "60 or 70% of Senegalese want me to leave Liverpool and I will do what they want"

“CHELSEA IS A BIG AND STRONG TEAM THAT NEVER GIVES UP”

“We respect Chelsea a lot, it is a club full of quality, with very good players. Matches of this type can only be prepared like this, we are sure that Chelsea will play better than in the first leg, we will have to be prepared”, replied Ancelotti, that he sees Chelsea as a “big, strong team that never gives up”.

Thus, the coach valued the experience of his squad in this type of match, a “luck” in the tie. “Our mood is one of happiness to play this game, it is a great opportunity to reach the semi-finals, with the normal concern of playing against a strong opponent. We have to have a lot of respect for Chelsea,” he stressed.

And for the return Ancelotti has not confirmed the presence of Fede Valverde, an important piece in the scheme in London to give more muscle to the midfield. “We would like to play the same game and the same approach, but Chelsea may change their approach. We have to be ready and prepared, we are thinking of playing in a different way,” he argued.

“I COULDN’T SAY NO TO REAL MADRID”

On the other hand, the Italian coach, who is currently in his second spell on the white bench, wanted to continue next year, “confident” that the season “will turn out well”. “Hopefully I can continue next year. But I don’t think about that, my contract is long but I don’t think about that. If the club is happy I will continue to be happy, and if not I will thank them for the time at the club,” he said, after confessing that he couldn’t say ‘no’ to Madrid’s call when he was coaching Everton.

A few words that he reaffirmed when asked about his options to be the Italy coach. “I like the day to day, not just the games. The games give you the emotion and happiness of being on the bench, but until I change my chip and my head from day to day I will not train a team, because I don’t like it only three months a year. When the desire of the day to day passes I will stop, “he sentenced.