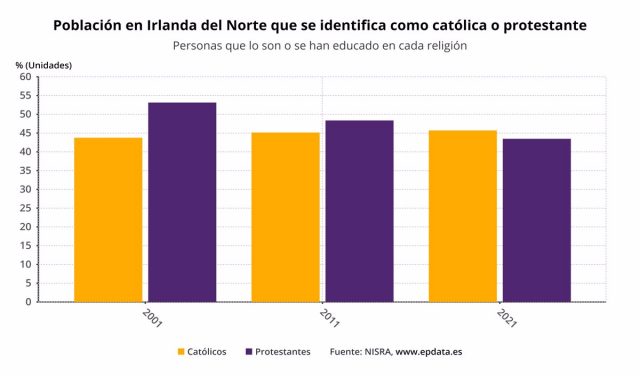 Northern Ireland now has more people who identify themselves as Catholics than Protestants, an unprecedented turn in the demographics of the British territory that ties in with the sharp political divide between Republicans and Unionists.

Historically, Ulster has been divided between Unionists, mostly Protestants and supporters of integration into the United Kingdom, and Republicans, mostly Catholics and advocates of the unification of the island of Ireland. The latter group had among its exponents the IRA, protagonist of the conflict that ended in 1998.

The May elections in Northern Ireland placed for the first time Sinn Féin, political heir of the IRA, and now the census drawn up on the almost two million inhabitants places the Catholic population slightly above the Protestants.

Specifically, 45.7 percent of Northern Irish citizens identify themselves as Catholic or have grown up in this religion, six tenths more than in the 2011 census, while Protestants represent 43.48 percent, almost five points less, reports the BBC.

Regarding national identity, 31.9 percent of the population identifies solely as British, 29.1 percent as Irish and 19.18 percent as Northern Irish. Forty-seven percent hold only British passports, while 27 percent carry only Irish passports.

The census produced in 2021 is the first since the 2015 municipal reorganization and since the 2016 referendum to leave the European Union. Its publication coincides with a time of political stalemate in Northern Ireland, in the face of the inability of Sinn Féin and the Democratic Unionist Party (DUP) to reissue an alliance that would guarantee the fulfillment of the 1998 peace agreements.