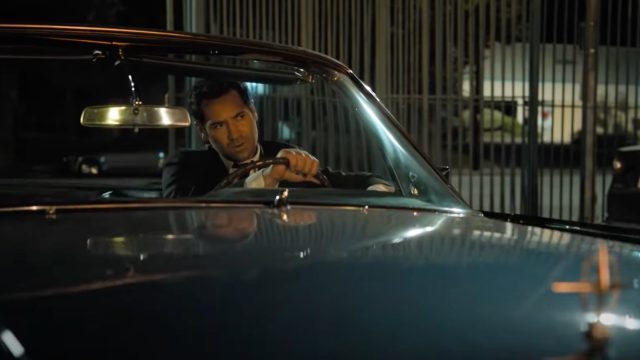 The trailer for the newest series, which serves as a remake for “The Lincoln Lawyer,” brings Mickey Haller, the character created by writer Michael Connelly, to Netflix.

Based on the novel written by Connelly, “The Lincoln Lawyer” gained notoriety when the film starring Matthew McConaughey landed on the big screen in 2011.

Developed by the “brain” of crime dramas, David E. Kelly, the series “The Lincoln Lawyer” was originally scheduled to premiere in 2020, only on CBS.

Last year, Netflix announced that it had taken over the series and, moreover, that Manuel Garcia-Rulfo would play the out-of-the-ordinary lawyer, Mickey Haller, in place of Matthew McConaughey.

Read:  The most expensive car in the world, sold at auction: how much did the Mercedes-Benz 300 SLR Uhlenhaut Coupé cost?

Netflix recently released a trailer for the series, in which we can see Mickey Haller addressing major cases in Los Angeles, while working as a lawyer in the back seat of his vintage car, Lincoln Town. Car.

In the new series, which will be available on the streaming network, Mickey (Garcia-Rulfo) is facing a highly publicized murder case, while trying to rebuild his family life.

Based on “The Brass Verdict”, the second novel in the “Lincoln Lawyer” series by Connelly, Netflix’s adaptation for the small screen comes to tell, once again, one of the most beloved stories of recent years.

Obviously, the actor who plays the main role in the television adaptation of the book has a difficult mission, because, let’s face it, getting into the shoes of a perfect character, at some point, by the great Matthew McConaughey is not easy.

The latest trailer can be seen below. Moreover, starting May 13, Netflix will broadcast the entire first season of this series.