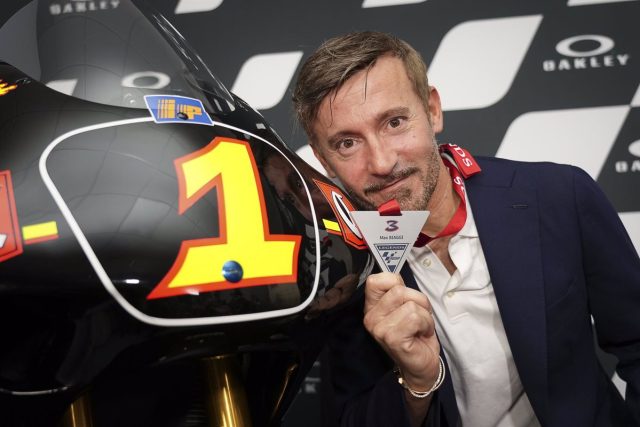 Former Italian MotoGP rider Max Biaggi, four times 250cc world champion, has become a ‘Legend’ of the Motorcycle World Championship in a ceremony held at the classic Mugello International Autodrome, taking advantage of the celebration of the Italian Grand Prix play this weekend.

“Naming Max as ‘MotoGP Legend’ is something not only important for him, but also for us. He has been a true legend, he has worked very hard, he has a team and a lot of success,” Carmelo Ezpeleta, CEO of MotoGP, explained this Friday. Dorna Sports, in statements provided by the championship.

For his part, Biaggi thanked the work of the manufacturers in the past (Aprilia, Honda and Yamaha) and all the people who were present at the event, who have “always” supported him in different teams and different situations, in the ” good days and bad days.

Read:  Marc Márquez: "We have taken a bit of a risk to test some things"

“I’m also proud that my family encouraged me on the bad days to keep going and never give up. My son and daughter are here, so it’s a very emotional moment because now they can say, ‘Hey, my dad is a Legend. ‘ So this is great! Twenty years ago, I didn’t even think about it, so on a personal level, this is also important.”

Biaggi achieved his first victory in 1992 and two years later, the ‘Roman Emperor’ was proclaimed World Champion for the first time, securing the first title for Aprilia in the 250cc category.

However, the glory was increasing. The Italian took the crown of the 250 displacement for four consecutive courses in total and with two different factories. Thus, he reigned in the category from 1994 to 1997, which earned him a place in the history of motorcycling.

In 1998, Biaggi moved up to the premier class and won on his 500cc debut, something that has not been repeated since. That year he was runner-up and began another string of impressive performances, not falling outside the top five in any season between 1998 and 2005, his last year in MotoGP. After leaving the ‘paddock’ of the World Championship, he achieved 42 victories, 13 of them in the premier class, 111 podiums and 56 pole positions.

The ‘Corsair’ later moved on to WorldSBK in 2007 where he managed to shine by becoming one of the few riders to take victory in his debut season. In 2010 and 2012, Biaggi would also capture two more world titles, thus adding six world titles to his record before retiring.