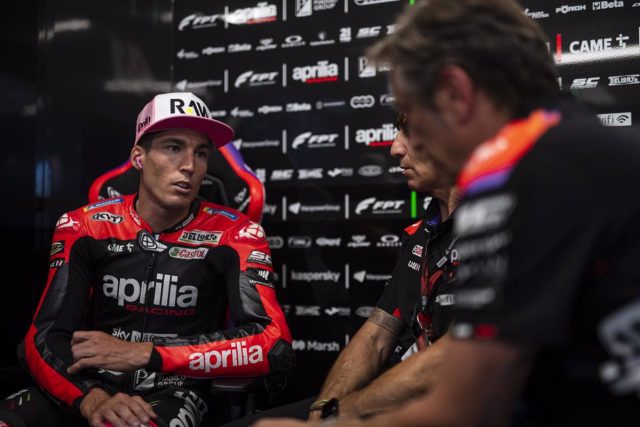 The MotoGP rider Aleix Espargaró (Aprilia) assured this Wednesday that he was “very happy and proud” of the “very fun” season that is taking shape, currently occupying second place in the World Championship, at the same time that he valued the Aprilia project and He recalled past controversies with which “a bad image” of the Granollers pilot was sold.

“We’re up front, fighting for the World Championship. It’s been a very fun year, I’m very happy and proud,” said the 125cc champion in 2004 in statements to the ‘La Caja de DAZN’ program collected by Europa Press.

Espargaró underlined the trust he has placed in Aprilia since his arrival at the project. “Already with the 2021 bike, I told the technicians: ‘We are not that far away. If we improve traction, we gain in revolutions, let the bike run a little more, I think I can win races, I can be in front.’ And Aprilia It has done it. Aprilia has achieved a motorcycle that has much more traction, is more agile, the engine turns faster and makes it run much faster, and I have shown it,” he added about the Italian team.

The man from Granollers also valued the statements of Massimo Rivola, CEO of Aprilia in MotoGP, highlighting the figure of Espargaró within the team as “‘captain'” of the brand from the Veneto region. “It was a nice detail. I don’t think he said it just because the only Aprilia rider who has been getting results, who has always believed in the project, was me”, he pointed out.

“I have always defended Aprilia a lot. When they have wanted to take on young riders, I don’t want to say names, I have gone to a thousand meetings to try to convince them, explain the project to them. I have felt that Aprilia is very mine, a very mine project for six years”, Espargaró declared about the team with which he renewed until 2024.

And within this process of growth in Aprilia, Espargaró vindicated his role in the signing of Mavericks Viñales. “Many people, from outside and even people from my own circle, told me: ‘It’s very good, you are bringing the “wolf” to your own house.’ And I said: ‘First of all, he is a friend and I want to help him. ‘” he confessed.

“APRILIA HAS THE BEST HUMAN TEAM IN THE ENTIRE ‘PADDOCK’

“Aprilia has the best human team in the entire paddock, I am a super happy guy here. But besides, I wish Aprilia the best. I want a good rider to come, but I think this is better for myself and I think this will also strengthen me because if I’m at the level of Maverick, I consider myself a good rider,” he praised his teammate.

On the other hand, and despite the fact that Aleix Espargaró is going through his best years in motorcycling, his sports career has been marked by misfortune and errors in making some decisions. “My sports career has been very unstructured, a lot. Much of it my fault and in another part maybe not. I have only found stability from the age of 26-27. In the last 4-5 years, I think I have done a good job, but not before. There have been many bumps along the way,” he acknowledged.

In his most difficult moment, when he did not have a motorcycle to compete in the 250cc World Championship, his brother, Pol Espargaró, wanted him to be part of his team. “My brother gave me a cable. He told me: ‘I’ll give you a salary, you come with me to the track, help me with whatever I need’. When he won the Moto2 championship, and I said: ‘Pol won it, but I feel partly the winner of that championship because I have suffered with him,'” he said.

Read:  Quartararo wins and leads the MotoGP World Championship and Aleix Espargaró gets on the podium

“AN IMAGE OF ME THAT IS NOT TRUE HAS BEEN SOLD”

“I remember seeing him cry when he lost races against (Scott) Redding, I picked him up and told him: ‘Come on, we’re going to win this championship.’ .

And it is that the Aprilia rider sees in his character one of his differential points with the majority of riders on the grid. “I am as I am and I say what I think, and sometimes that makes me black or white, or they love you or they hate you. If I have so many people who love me, so many followers with the little record I have, it is because I have always been transparent,” he stressed.

“When the races are over or you have to say something, I say it. I don’t say: ‘Thanks to my team, everything went very well, until next time’. 80 of the 93 drivers in the team will tell you that. World Cup, but not me”, he valued.