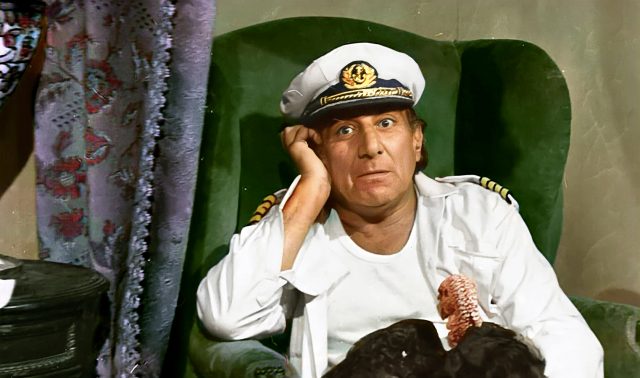 Jean Constantin lived in one life as many as ten, both on stage and “backstage”. In fact, that’s what an actor is meant to do, no matter what country he comes from.

To our great good fortune, Jean was one of us, so he left his mark on entire generations of Romanian cinephiles, making their communism easier to digest.

Jean Constantin is said to have been born an actor, not to have become one. In fact, that’s pretty much what happens to all great artists, they stand out from the rest through naturalness, charm and extreme talent.

And when all these qualities are combined with embodied modesty, the result can only be a man who is born rare, and-when he is born-he changes the world around him.

He did not give up Constanta for America, but returned with love, each time, to the city that remained, in his heart, his true home.

Jean Constantin, the Greek who played Roma or Turkish roles – the life story of one of the most beloved Romanian artists

Jean Constantin was born on August 21, 1927, in Techirghiol, into a large mixed family. His mother was Greek, his father Macedonian Albanian.

Constantin Cornel Jean, his real name, was the youngest of nine children.

Incidentally, the artist was to be known on stage as Jean Constantin, and no one ever knew why he chose, at one point, to reverse his name.

“When and how the reversal of the order of the two words occurred is a question still to be answered. What is certain, however, is that in the first chronicle of one of his shows, “Mașenka and the Bear”, in 1955, he is called Jean Constantin. Jean has probably always been perceived as a first name…”, Jean Badea, a friend of his, told Adevărul, “The man who brings… fun”.

Read:  The car battery industry: what BMW is investing in

Before becoming an actor, Jean Constantin learned to do everything: bricklaying, working in a bakery, making cloth shoes. “I learned masonry, wheelbarrows… I worked. There were a lot of us, and my father couldn’t support us, it was hard”, the actor told Eugenia Voda, on “Professionals”, according to the source quoted above.

In 1957, he had a stroke of luck and won, through a competition, a position in the stage section of the Constanta Theatre, an institution that would remain in his heart forever, mentioning his name at every opportunity.

“Every time he made me laugh, to rejoice. With him there was never any routine, he was always inventing something. A role done 1,000 times was never routine with him”, said Mihai Sorin Vasilescu, an actor from Constanta, about Constantin.

Even so, Jean Constantin has never had a leading role, although he “stole” the stage many times in the supporting roles he played.

The Curse of the Three Anastasias

Beyond the controversy of his own name, perhaps more importantly, Jean Constantine had three sisters named Anastasia.

The first of them died in 1929, and a second daughter was born in 1931, who was to bear the same name as a tribute to the first.

Tragically, two years later, the second Anastasia, born in 1936, died, and a third daughter was born with the same name.

And because the curse was knocking on the door several times, this one would also die young, in 1972.

Jean Constantin loved and respected women: “For me, women mean the sky, the sun, the air, the water and Murfatlar wine”

According to the artist’s acquaintances, Jean Constantin loved and respected women, and could not imagine life without them. He was married three times, all three marriages coming from the world of theatre.

Read:  Sad news for 1899 fans: what a radical decision Netflix has made

“Women, for me, mean the sky, the sun, the air, the water and Murfatlar wine… in the Chinese zodiac, with flowers and animals, I’m not a crow, as some say, I’m a butterfly… And I’ve flown all my life from flower to flower,” the artist confessed.

If he first married Mioara Mocanu, from the Puppet Theatre in Galati, he later proposed to Nina Cocea, a ballerina at “Fantasio”. In 1980, he married for the last time, this time to Elena Nina Petcu, a bellows player at the National Theatre in Bucharest.

“Everything around me has a woman’s name… I have a washing machine that, when the water doesn’t reach the floor, I go and say “what are we going to do Mărioaro?” Or a stove that, when it doesn’t have any light bulbs on, I go and say “damn you Lenuțo!”. Women, women, women!”, the actor said smiling on “The Professionals”.

He always returned home to Constanta

Despite the fact that he could have made his way anywhere, thanks to his charm that is hard to match, Jean Constantin never forgot where he had come from, and moreover, he never gave up Constanta for the capital, just as he would not have done for “all America”.

Jean Constantin loved the sea with all his heart and here, in Constanta, he felt truly fulfilled.

For years, the artist commuted by train on the Constanta-Bucuresti route, preferring to return home each time.