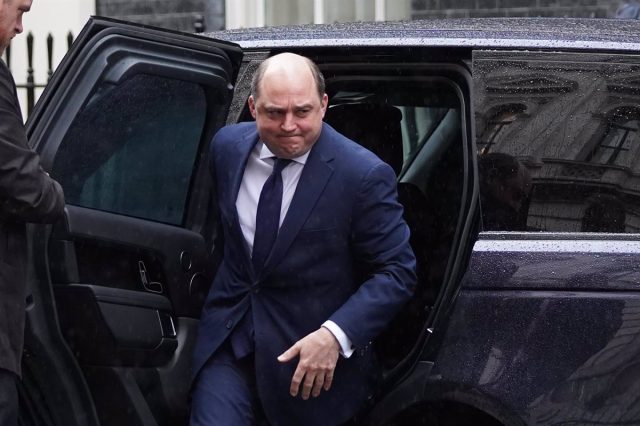 British Defense Minister Ben Wallace lashed out this Wednesday at Russian President Vladimir Putin, whom he says “has become completely stupid”, and recalled that if once “the Scots Guards kicked the Tsar’s ass Nicholas I in 1853 in the Crimea, it could always be done again.”

“Unfortunately, we now have a busy adversary in Putin, who has gone completely foolish,” Wallace snapped during a meeting with senior military commanders at the Cavalry Building in Westminster, reports the British newspaper ‘Evening Standard’.

“The Scots Guards kicked Tsar Nicholas I’s ass in 1853 in Crimea, we can always do it again. Tsar Nicholas I made the same mistake as Putin, he had no friends or allies,” recalled Wallace, who has ventured that the Army Russian is going to be “busy”.

Once before the press, Wallace has indicated that the United Kingdom has a thousand military troops ready to respond to any new maneuver that arrives from Moscow and that exacerbates the crisis in Eastern Europe.

Read:  Biden says "it is clear" that Russia attacks civilians but it is "early" to confirm war crimes

“We are in a very good position to deliver any kind of aid to Ukraine quite quickly, no matter what kind,” said the British Defense Minister, who has even speculated that Russia could deploy a “mobile crematorium” to hide the trail of victims that could cause a hypothetical invasion.

“When you have more than 60 percent of your fighting forces on the borders of another state, the overwhelming escalation of Russian forces and intimidation — including some pretty horrendous weapons systems — are quite concerning,” he said.

“We hope to see some of the things that they have done previously. Previously, they have deployed mobile crematoriums to follow troops around the battlefield, which is scary for anyone,” he said.

“If I were a soldier and I knew that my generals have so little faith in me that they follow me around the battlefield with a mobile crematorium, or if I were the mother or father of a child deployed in a combat zone, and If my government thought the way to cover the loss was a mobile crematorium, I would be very, very worried,” Wallace said.

Read:  Kuleba says the Bucha murders are just "the tip of the iceberg"

RUSSIA ANSWERS AND TALKS ABOUT “MYTHOLOGY”

For his part, the Russian Defense Minister, Igor Konashenkov, has recommended that the British military “study well not only the geography of Russia, but also its history” and has branded some British politicians as “poorly educated”.

“Especially for the British Army, it will be useful to know that today’s statements by its defense minister on the Crimean war are nothing more than mythology”, as he has referred to “the only feat” of the unit that Wallace has done reference is that he “did not flee” as, he says, did the rest of the British forces in the face of the Russian response.

In this same context, he recalled that the Russian artillery managed “in just 20 minutes” to destroy “an entire English aristocratic brigade”. “This was the ‘feat’ of the British in the Crimean War, who enriched all the world’s languages ​​and military textbooks with the concept ‘cannon fodder,'” Konashenkov said, according to the Russian agency Interfax.