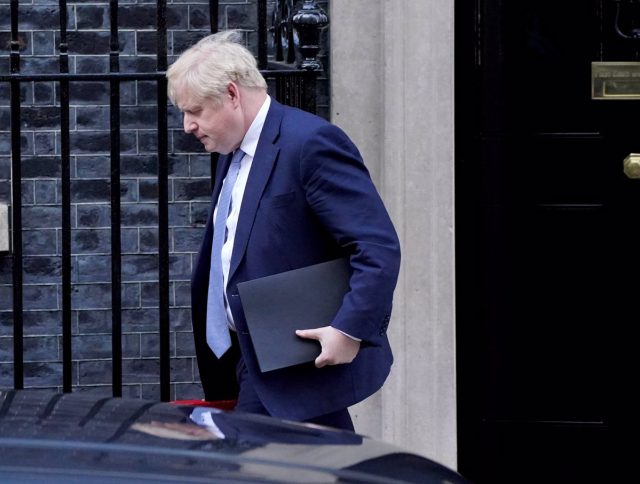 Sue Gray’s report on parties in Downing Street during the COVID-19 pandemic has concluded that the Government of Boris Johnson made “failures of leadership and judgment”, while at the same time it has stressed that the Executive’s behavior around meetings “is hard to justify.

The investigation, which has not been published in full due to another investigation by the British Police on the matter, is a 12-page document prepared thanks to the interviews of 70 people who attended a total of 16 events. Among the parties investigated by Gray, which began in May 2020, several stand out in the Downing Street garden, in the building’s dependencies or in the Ministry of Education.

According to Gray, the meetings took place over a 20-month period at a time “unique in recent times in terms of the complexity and breadth of the demands placed on public servants and, indeed, on the citizenry in general.” .

Thus, he has remarked that some of these meetings “should not have been allowed” and has made ugly that, in the context of the pandemic, “when the Government asked citizens to accept harsh restrictions on their lives, behavior regarding these meetings is difficult to justify.”

The report has stressed that “at least some of these meetings” represent “a serious mistake to meet not only the high standards expected of those who work in the heart of the Government, but also with the standards expected by all the people British at the time,” the British press reported.

For this reason, the official has accused the Johnson government of “errors of leadership and judgment.” “Some of these events should not have been allowed. Others should not have developed in the way they did,” he insisted.

“There is a great lesson to be learned from these events that must be immediately evaluated throughout the Government,” Gray pointed out, before specifying that “this does not have to wait for the police investigations to conclude.” According to the report, the Metropolitan Police is investigating 12 events, four fewer than the investigation published on Monday.

Sue Gray’s analysis also specifies that “it is not possible” to present a report with significant content and showing everything that has been discovered precisely because of the police investigation. “Unfortunately, that necessarily means that I am extremely limited in what I can say about these events,” she said.

Johnson, whose political future is in the air due to the scandal unleashed by the parties, has received the report during the day. The ‘premier’ promised last week that it would be published in full.

ASK FORGIVENESS “IS NOT ENOUGH”

After the publication of the report, Johnson has appeared in the House of Commons, where he has expressed his “deepest gratitude” for the official in charge of carrying out the investigation, who has said that he “completely” accepts the investigation.

Johnson has focused on the fact that the pandemic has been “hard on everyone” and has admitted asking British citizens to make great sacrifices for the sake of security.

“We ask people to make extraordinary sacrifices, such as not seeing their loved ones, not visiting them before they die, and I understand the anger that people can feel,” he said, while opposition parliamentarians have shouted at him to “resign.” “But it’s not enough to ask for forgiveness. It’s a time when we need to look at ourselves in the mirror and we need to learn.”

Read:  Biden says "it is clear" that Russia attacks civilians but it is "early" to confirm war crimes

“Of course I accept Gray’s findings completely and, above all, his recommendation that we must learn from these acts and act now,” he said, before announcing changes in the management of Downing Street, the Sky News network has collected. .

Thus, it has specified that it will launch an “office of the prime minister” led by a “permanent” secretary to manage Downing Street. In addition, he has pointed out that it is time for the codes that apply to public servants “to be strengthened appropriately.”

British Opposition Leader Keir Starmer has also thanked Gray for his analysis, stressing that it provides “evidence of gross and flagrant lockdown violations”, referring specifically to a party held on November 13, 2020 in the flat. of Johnson.

“There can be no doubt that the prime minister is now the subject of a criminal investigation,” he added, emphasizing that the ‘premier’ has insulted the intelligence of the citizenry. In addition, he has said that he is not resigning “because he is a scoundrel.”

The former Prime Minister of the United Kingdom Theresa May has intervened in the session to point out that leaders “must be an example by following the rules” and recalled that the limitations imposed to stop the pandemic restricted the freedom of citizens.

“They have the right to expect that the prime minister has read the rules and understood their meaning,” he added, before pointing out that, in the case of the ‘premier’, “either he did not read them, or he did not understand them or he thought that They didn’t affect him.” Johnson, for his part, has once again asked the British deputies to “wait to see the conclusion of the investigation” by the police.