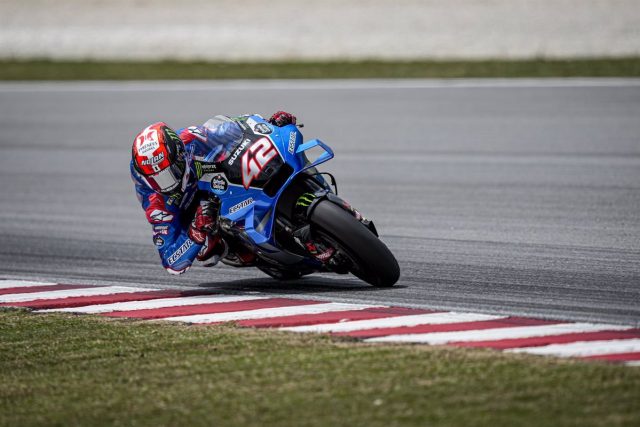 The rider Álex Rins (Suzuki) led the first day of free practice at the MotoGP Qatar Grand Prix, the opening round of the 2022 World Championship, ahead of Marc Márquez (Repsol Honda) who is excited about the new bike and his teammate at Suzuki Joan Mir, while Augusto Fernández and Izan Guevara were the best in Moto2 and Moto3 in a day dominated by Spain.

The two Suzukis, who were like a shot this Friday in the Qatari circuit, and Marc Márquez took a one hundred percent Spanish ‘podium’ on a day that, to be the one that opened the mouth of the new championship, left equality between several factories but, others like Ducati or Yamaha, will have to get their batteries on quickly.

In fact, the current world champion Fabio Quartararo (Yamaha) was eighth in this first contact with what will be the new reality. There is a world left, but MotoGP does not usually wait too long. And, in Ducati, they improved in FP2 to place the ‘satellite’ Jorge Martín in fourth position, but Jack Miller, the first factory rider, was sixth, four tenths behind Rins.

Read:  Crivillé: "Álex Rins is driving with the confidence of champions"

A few falls, like that of the current world runner-up ‘Pecco’ Bagnaia (tenth), didn’t help much at Ducati either. Who can breathe easy and work with a smile on their face are the Suzuki drivers and mechanics, with Rins and Mir first and third and, above all, with a top speed in Rins that perhaps did not surprise their own but strangers. The blue bullet was faster than anything at Losail and surprisingly the Yamaha from ‘El Diablo’ was the slowest.

It remains to be seen how the weekend evolves, but Marc Márquez, who is finally starting a World Championship smoothly, was regular in both the first and second free practice sessions and came close to dominating both. In the end, he was second only 35 thousandths behind Rins.

A result that, according to the “good base” of the Honda that the one from Cervera commented, can be hopeful for the Japanese factory. In addition, his partner in the Repsol Honda Team Pol Espargaró was ninth in the combined times, and in the morning they also slipped in between the best Takaaki Nakagami and Álex Márquez (they lost steam in FP2).

He also highlighted the good work of Aleix Espargaró with the Aprilia, seventh, and that in his last fast lap attempt, hoping to lower his best time, he ran into his teammate Maverick Viñales ahead who, without seeing it coming , cut gas and screwed up the return. The one from Granollers, hot, complained conspicuously.

Meanwhile, in Moto2, there was also Spanish dominance with Augusto Fernández (Red Bull KTM Ajo) and his partner and current Moto3 world champion Pedro Acosta finishing in the first two positions, with 160 thousandths between them and with Schrotter third at 164 thousandths. Arón Canet was fifth to four tenths.

In the small category of Moto3, to culminate the success of the Spaniards in Qatar, the fastest was Izan Guevara (GasGas), with the British McPhee (Husqvarna) second to four tenths and the Italian and contender for the title Foggia (Honda) third , although being one of the few who made his best lap in FP1.