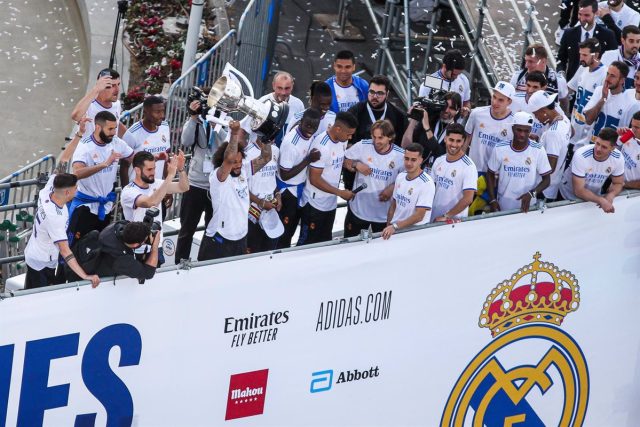 Real Madrid celebrated its 35th League title this Saturday with thousands of fans in the streets of the capital and in the traditional meeting at the Cibeles fountain, where captain Marcelo dressed the goddess in white and the fans and team gathered together for the objective now of the ‘Champions’.

Carlo Ancelotti’s team did not fail in their first chance to seal the title this Saturday, with a 4-0 win over Espanyol at the Santiago Bernabéu. The party started at the stadium but the main course was, as is the tradition of Madrid, the visit to Cibeles.

The champion squad, four days before the end of the tournament, got on a bus without a top to enjoy the streets full of fans on their way to the central square. There, thousands of Madrid fans, who were unable to celebrate the title two years ago due to the coronavirus pandemic, took it out in a big way by packing all the adjacent streets.

Read:  Marc Márquez: "The important thing is to continue building and improving"

The Real Madrid coach, Carlo Ancelotti, was the first person in charge of making the party go all out. Microphone in hand, the Italian coach led the chants of all those present. “We are very happy to be able to celebrate the League with you”, said an Ancelotti with a historic record.

The white coach achieved the only one of the five major European leagues that he did not have. Ancelotti also had his moment along the way, dancing included, and with his arrival at Cibeles, escorted by the police along the Paseo de la Castellana, Real Madrid also indulged in speeches by Marcelo and Modric.

The “yes you can” resounded loudly. On everyone’s lips and minds, due to its closeness and importance, was the second leg of the Champions League semi-final against Manchester City. On Wednesday, with the euphoria and unity that give a title, Madrid will seek a comeback from 4-3 in the first leg to be in the final in Paris.

“Let’s go for Wednesday,” said Ancelotti, while that “yes you can” struck a chord among the white fans, when Marcelo put his team’s scarf on Cibeles, wishing to return to the emblematic Madrid fountain soon with a giant double.