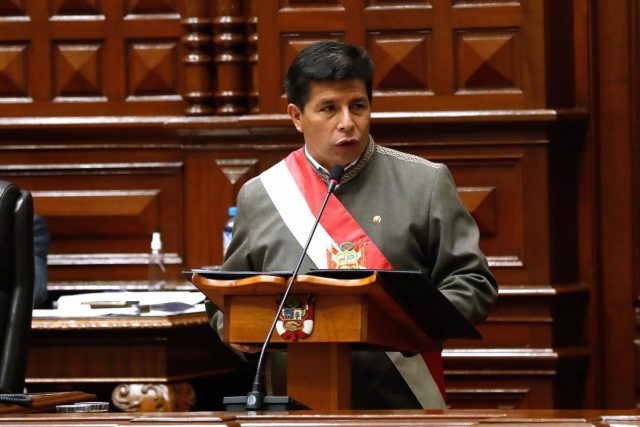 The opposition assures that there is a “flight risk”, since the president is under five investigations by the Prosecutor’s Office.

The Peruvian Congress has denied Thursday the permission to the Peruvian president, Pedro Castillo, to travel to Bogota from August 6 to 8 on the occasion of the inauguration ceremony of the new president of Colombia, Gustavo Petro.

With 67 votes against his trip, 42 in favor and five abstentions, the Peruvian Parliament has denied Castillo the possibility to be absent from the national territory arguing that five investigations by the Attorney General’s Office are weighing on him, the broadcaster RPP has reported.

“Many of us think that he should not travel. And that is not hate, it is not revenge. We have given him permission on other occasions,” explained pro-Fujimori Congressman Hernando Guerra during his speech.

Lawmaker Adriana Tudela of Avanza País, for her part, has exposed that in the current circumstances the indications of corruption are “overwhelming and abundant” and that in that context “the danger of flight becomes more real.”

“He attends a protocol act, so it is not necessary for him to travel, and the Chancellor may very well go. Our responsibility is that the president is accountable to the people he claims to represent”, said the Peruvian deputy.

But the bench of Peru Libre, the party with which Castillo ran in the elections, has seen no reason to oppose such authorization. “Don’t get carried away by hatred and conspiracy theories, because we are going to make an international mess,” said parliamentarian Katy Ugarte, according to ‘El Comercio’.

“There is no reason to make us look bad abroad,” stressed Congressman Elías Varas, from Perú Bicentenario.

According to Article 102 of the Constitution, the Congress of the Republic of Peru has among its powers “to authorize the President of the Republic to leave the country,” which is why Castillo had to request permission to travel to Colombia.

In response to the Peruvian Parliament’s refusal to allow the president to travel to Gustavo Petro’s inauguration, Pedro Castillo has stated that he regrets the “unusual and arrogant manner” of the Congress in prohibiting him to attend.

“From the Executive we have always respected the independence of the powers of the State. I regret that, in an unusual and arrogant way, the Peruvian Congress prevents me from attending an international protocol act”, said the Peruvian president in his Twitter account.

Likewise, Castillo has argued that his non-presence at the investiture of the Colombian president-elect “dents the democratic ties with the sister Republic of Colombia”.

A similar opinion is shared by the Peruvian Foreign Minister, César Landa, on the subject.

“Our international image is once again called into question by not authorizing the president’s trip (…) I call on the congressmen, who on other occasions have reversed decisions to honor Peru’s international commitments,” he has also urged on his Twitter account.

This weekend, Colombian president-elect Gustavo Petro is scheduled to be inaugurated and thus take over from Iván Duque.