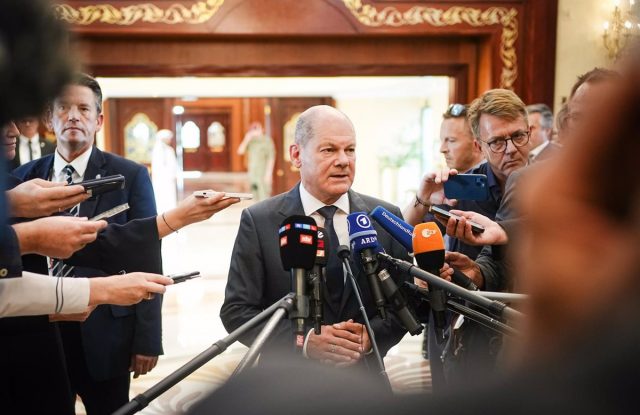 German Chancellor Olaf Scholz said Sunday during an official visit to the United Arab Emirates that conditions for migrant workers at the Qatar World Cup have improved in recent years, but remain far from ideal.

“We notice that there is progress on issues that had to be fought for a long time, such as the situation of workers. Even if that is far from (being so),” the German chancellor has said from Doha after meeting the day before with Saudi Arabia’s Crown Prince Mohammed bin Salman.

Although Scholz has not confirmed whether he will personally attend the event, he stressed that Germany’s representative for the World Cup in Qatar will be decided “at short notice” amid criticism of the country’s treatment of migrant workers.

Migrants from Nepal, Sri Lanka, India, Pakistan and Bangladesh work on the construction of stadiums to host the matches, but also hotels, airports or transport lines. As revealed by ‘The Guardian’ in February, more than 6,500 migrant workers have lost their lives in Qatar since 2010 as a result.

On the other hand, in the framework of his visit, the German Chancellor has announced the presentation of new proposals by the Executive to curb the energy crisis, claiming that the main thing now is to “reduce prices”, which are “too high”.

Scholz has added that, on the eve, a commission has begun consultations on the matter and that, for the moment, it is doing “a very good and constructive work. “We will be able to count on quick results,” he said.

Read:  Tories set July 21 as deadline to narrow down to two candidates to succeed Johnson

At the same time, however, the financing of such a measure is being discussed. The government coalition had already agreed to set a ceiling on electricity prices. Thus, households will receive an amount of electricity for basic consumption at a reduced price, as will small and medium-sized enterprises.

As part of Scholz’s visit to the United Arab Emirates, the German energy company RWE has signed an agreement for an initial delivery, scheduled for December, of 137,000 cubic meters of liquefied natural gas (LNG) from this Gulf country to a terminal near Hamburg.

According to RWE, a memorandum has been signed for deliveries over several years starting in 2023. By way of comparison, on February 1, before the war in Ukraine, a gas volume of 1.7 million flowed through the Nord Stream 1 pipeline, according to the operator.