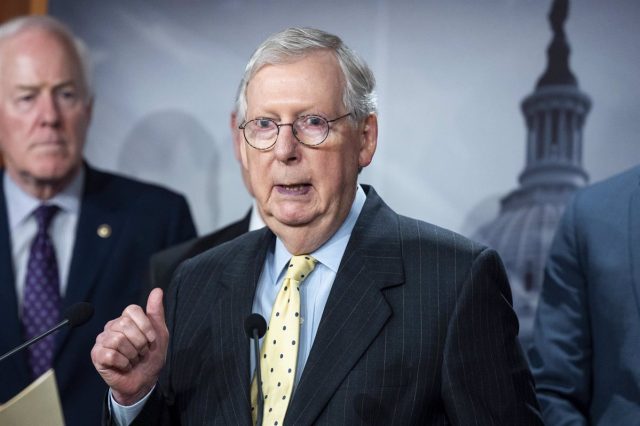 The leader of the Republican minority in the United States Senate, Mitch McConnell, has criticized his party colleagues for having approved last week to censure Representatives Liz Cheney and Adam Kinzinger for their position in favor of investigating the involvement of former President Donald Trump in the “violent insurrection” that occurred on January 6 at the Capitol.

“It was a violent insurrection with the purpose of trying to prevent the peaceful transfer of power after legally verified elections,” said McConnell, who has criticized those in the party who “point out” those “who may have different points of view to those of the majority,” reports CBS.

“That is not the job of the Republican National Committee” (RNC), McConnell has settled, days after a disapproval against Cheney and Kinzinger, the only ones from the party present in the parliamentary commission investigating what happened on Capitol Hill, was approved by a large majority and one of the few who have openly questioned the conspiracy theories spread by Trump.

“The purpose of a political party is to attract as many members as possible,” said Iowa Senator Chuck Grassley, who prefers a Republican Party “where everyone is welcome” and focused on “taking control of Congress” after the elections of mid-term in November this year.

Following these words by McConnell, former President Trump has issued a statement in which he asserts that the leader of the Republican minority in the Senate “does not speak for the Republican Party and does not represent the opinions of the vast majority of its voters.”

Thus, Trump has criticized the senator because he considers that “he did nothing to fight for his voters and stop the most fraudulent elections in the history of the United States”, and has assured that, if the tables had been turned, the Democrats would not have acted like McConnell.

“If Mitch had fought for the election, as the Democrats would have done if they were in the same position, we would not be discussing any of the above today, and our country would be strong and proud instead of weak and ashamed,” added the former president. , according to the newspaper ‘The Hill’.

Last Friday, almost the entire RNC plenary supported the censorship presented by David Bossie, one of Trump’s loyalists within the party, in which he called for the “immediate cessation of any support” for Cheney and Kinzinger as Republican congressmen for their “destructive” attitude in the United States House of Representatives.

In that text, Cheney and Kinzinger are accused of being participants in “a persecution directed by the Democrats” towards “ordinary citizens”, in reference to the mob that stormed the Capitol, who were only following “a legitimate political discourse”, who would come to be Trump’s baseless theories of voter fraud.

However, not everyone in the Republican caucus in the United States Congress has spoken along these lines, as is the case with Elise Stefanik, Cheney’s replacement as the highest representative in the lower house, or the person responsible for the discipline of party in the House of Representatives, Steve Scalise.