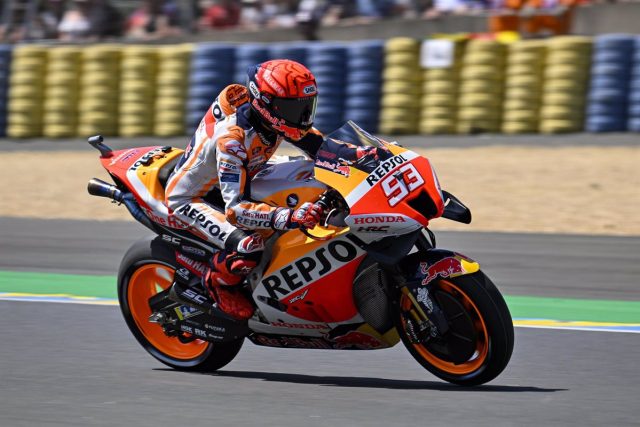 The Spanish MotoGP rider Marc Márquez (Repsol Honda) has explained that he has not found “the speed” or the good “feelings” during qualifying for the French Grand Prix, and has had to settle for a tenth starting position, although he believes that they are not “far” in terms of pace and that they could be “fighting in the second group” in the race.

“This morning our sensations and our pace weren’t bad, and we had a good lap. It’s okay, I followed Quartararo but I felt good and found good speed. In the afternoon, with the warmer conditions, from the FP4 I have not felt as good as before with the bike and in the second start I have been working a lot on my riding but I had a small crash,” he said in statements provided by his team.

However, the one from Cervera has not been able to rediscover the good feelings. “I went into qualifying on new tires quite hopeful, but the speed just wasn’t there, and neither was the feel. We need to understand why. Normally I can adapt better to different conditions, but I just couldn’t find my way today. When you look at the lap times, our pace is not that far off and I think we may be fighting in the second group.”

For his part, his teammate, Pol Espargaró, acknowledged that it had been “a tough day”. “Especially when the temperature rises, because it has been difficult for us to match the speed of the morning. In the morning I was able to get through to Q2 even after the crash and we already knew that in the afternoon it would be difficult,” he said.

“We didn’t maximize our performance in qualifying because I ran into Johann -Zarco- on my last lap, but at the end of the day I don’t think this made a big difference. A good start will be important tomorrow and with a long straight we have potential to gain positions early and aim to fight with the second group,” he concluded.