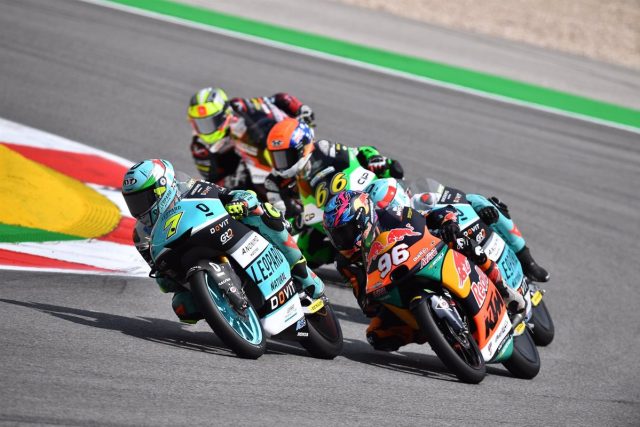 The Spanish rider Arón Canet (Kalex) took pole this Saturday for the Moto2 race of the Italian Grand Prix, the eighth round of the Motorcycle World Championship, ahead of Pedro Acosta (Kalex), while Dani Holgado will start second in Moto3 along with the Turkish Deniz Oncu (KTM), ‘poleman’ of the small category.

The man from Corbera, with a time of 1:51.121, thus guarantees his second pole of the year after the one achieved in Portugal, the eighth of his life in the championship and the third in the intermediate category. Next to him will start the Murcian, who will start for the second consecutive race on the front row, and the British Sam Lowes (Kalex), third.

In Moto3, the Turkish Deniz Oncu (KTM) will lead a first row in which he will be accompanied by the Spanish Dani Holgado (KTM), second, while the leader of the championship, Sergio García Dols (GasGas) will start fourth.

In an appointment marked by the hard accident on Friday during Free Practice 2 of the Japanese Ayumu Sasaki (Husqvarna), who was involuntarily run over by the Spanish Jaume Masià (KTM) after suffering a ‘highside’ and fractured both clavicles, the Ottoman pilot signed his second first starting position after the one achieved in Portugal.

Thus, he will lead the front row of the grid together with Holgado and the Italian Dennis Foggia (Honda), the fastest in the third free practice and who was only prevented from achieving pole position by a slower last sector in Mugello.

In the second qualifying session, the Spanish Dani Holgado (KTM) set the first great reference time before the dance of positions began that led the British John McPhee (Husqvarna) to lead the time table at the halfway point of the session .

With just a minute to go, Öncü took control by stopping the clock in 1:56.811 to seal his second pole position of the year; Holgado moved up to second place and Foggia, without a slipstream, came very close to storming the lead on his last attempt.