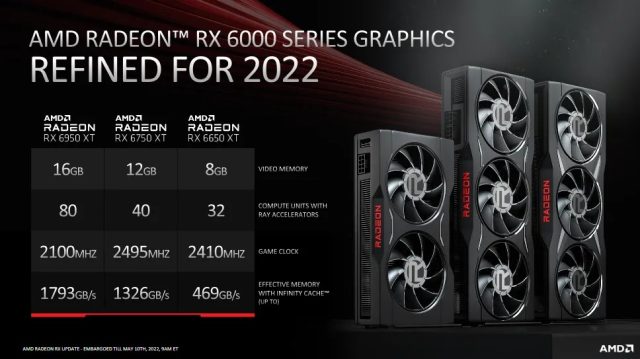 The current generations of graphics cards are already on the market for almost 2 years, which means that we can prepare for new launches by the end of this year. However, AMD comes with three new models of the Radeon RX 6000 generation, with improved performance compared to existing models. Basically, we have a new flagship GPU in the company’s portfolio, the new Radeon RX 6950 XT, along with two models that go to the mid and mid-high areas.

The new Radeon RX 6950 XT GPU is AMD’s most powerful gaming GPU to date. At the hardware level, it comes with not very big improvements compared to the RX 6900 XT launched almost two years ago, but small adjustments can offer a performance even 10% higher than the previous flagship. We are talking about a GPU with 80 processing units, 16 GB GDDR6 memory, boost frequencies up to 2,310 MHz and a declared consumption of up to 335W. Even if you don’t see many upgrades on paper, in reality, the faster memory and higher frequency of Infinity Cache will make a difference in some titles. And the price difference is not extremely large compared to the original RX 6900 XT, which was launched at $ 1,000. The new Radeon RX 6950 XT starts at $ 1,099.

Read:  India wants to launch its own GPS network, Apple and other smartphone makers say it can't in the near future It will enter the offer between the already existing Radeon RX 6700 XT and the 6800 XT model from the superior range. Priced at $ 549, it could become a very good model to recommend for a good price / performance ratio. The price of $ 399 is in line with what we would expect from a GPU like this. And now there is a good chance that you will find this GPU and even higher models at the recommended price.

Read:  iPhone 14, complained about horizontal lines displayed when the screen starts. Apple's response: not a defect

The video card crisis seems to be over

It seems that the demand for graphics cards has dropped quite a bit, mainly due to price increases in the energy market, but also due to the substantial decrease in the value of cryptocurrencies in the last period. Also, the increased demand caused by the pandemic has dropped quite a bit, while factories, even if they cannot cover the demand for chips, can produce more than is needed in this market segment at the moment.

With these new graphics cards, AMD is launching a new version of the AMD Adrenaline Edition driver, as well as AMD Fidelity FX Super Resolution 2.0 technology, which can significantly improve performance in compatible games. One of the first titles to benefit from AMD FSR 2.0 is Deathloop, one of the most popular games of last year. The best part about FSR 2.0, unlike the NVIDIA DLSS, is that the AMD solution works on any graphics card model, whether it’s produced by AMD or NVIDIA.

Starting May 10, AMD is relaunching the Raise the Game promotion, which will offer free games included in the video card package. The titles in this promotion are the new Saints Row and Sniper Elite 5.