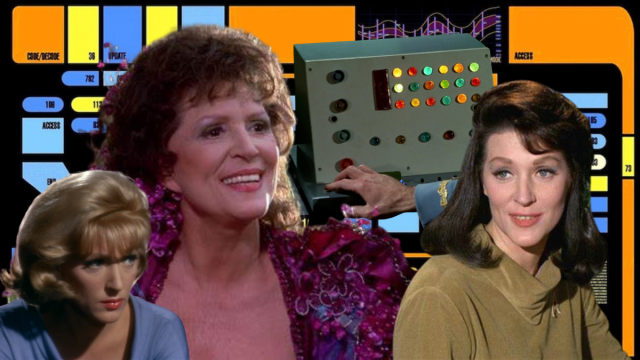 For fans of “Star Trek” in the ’90s, there were no more thrilling words than those at the beginning of each episode. Maybe just the computer voice provided by Majel Barrett-Roddenberry. The actress would become the unofficial “grandmother” of today’s voice assistants, Siri or Alexa.

“The Next Generation”, “Deep Space Nine” or “Voyager”, these are just some of the Star Trek series in which the voice of the “First Lady” of Star Trek, Majel Barrett-Roddenberry, responds to absolutely any voice command. She is the wife of the franchise’s creator, Gene Roddenberry, and was an ubiquitous part of the show.

Barrett, who died in 2008, is said to have turned 90 this year and is now part of the “Gene Roddenberry: Sci-Fi Visionary” exhibit at the Comic-Con Museum in San Diego. on June 9, 2022.

In this exhibition you can see the extravagant costumes that Majel Barrett-Roddenberry wore when she played the character Lwaxana Troi (Deanna Troi’s mother), in “Next Generation”.

In fact, two of the characters created by the immortal Majel return to the small screen, on May 5, with the release of “Star Trek: Strange New Worlds” on Paramount +.

It can be said that Barrett-Roddenberry’s legacy is much deeper than that: it was the inspiration for the construction of Amazon’s personal voice assistant technology, which, before being renamed Alexa, was called Majel, in its prototype stage.

If she had lived, Majel would probably have been extremely happy to know that, since in the “Original Series”, the actress was not allowed to continue playing the role of the second captain, which made her terribly sad. that time. The reason is easy to understand: the rigors of those times could not allow a woman to play such a role. However, Majel Barrett-Roddenberry was “avenged”, as, in a short time, the lieutenant Uhura appeared in the series, who, in addition to being a woman, is also black.

Read:  Tesla is facing problems in Europe: what the authorities are checking

In the pilot episode of the ’60s series, entitled “The Cage”, the actress played the role of second captain Christopher Pike. NBC rejected that pilot without appeal in February 1965, on the grounds that the role was played by Majel Barrett-Roddenberry, a woman.

“They thought that a woman in a position of command would not be really credible, I think, at the time, or at least accepted by the general public,” said Rodett-Roddenberry’s son Rod Roddenberry in an interview. granted to IndieWire. Later, the network allowed her to return, but in a completely different role, as an assistant to Christine Chapel.

“It was a big disappointment for her,” Rod Roddenberry said, adding that NBC’s representatives weren’t too happy with Spard, played by Leonard Nimoy, at the time. “My father had a nice story that he told, more jokingly, more seriously: that he fought to keep Spock and married Majel. This joke is a bit chauvinistic, but that was the period and these were the jokes “.

Barrett-Roddenberry married Gene Roddenberry in 1969 after The Original Series

Gene Roddenberry later found another role for his future wife: one who would become truly iconic for Star Trek over the next four decades. “I guess since my father took on the role of second officer, he did everything he could to give her as many roles as possible, to keep her happy,” Rod Roddenberry said. “But this is pure speculation on my part,” Gene’s son continued.

Although in the 1960’s “Original Series” she played the role of a computer with a slightly “tickled” voice (joking that she might break the warp core with her voice) in The Next Generation ”and“ Deep Space Nine, ”as Barrett-Roddenberry grew older and his voice thickened, he approached a more relaxed expressiveness that made him look more like a personal assistant and less like a lifeless robot: a kind of electronic brain, like Alexa or Siri.

“I talked to her about how recognizable her voice is,” said the actress’ son. “I wish I could hear her voice every time I go to an ATM, for example. So I called a professional audio team and recorded their voice. And what we tried to do was get everything phonetically from it, as well as some key phrases from Star Trek. We did all this with the idea that we would approach a technology company, because what happened is that when Amazon, Google and Apple started dating Alexa or Siri, these companies approached it and asked- he will give his voice. I don’t know why, she refused at the time. About 15 years have passed since then. I talked to Google about trying to do something about it, but I had some gaps. I didn’t catch everything phonetically. And they suggested an actor come up with what’s missing. I refused because I didn’t feel it was authentic enough, “added Rod Roddenberry.

Read:  14 of the most bizarre Christmas traditions

It can be said that Majel Barrett-Roddenberry used her talent in another way: after her husband’s death in 1991, Roddenberry’s inheritance was in a state of disarray, as there were disputes over Gene’s will. The family’s bank accounts were frozen. So she intensified her appearances at the Star Trek conventions and took her husband’s old speeches out of the mothballs.

“She wanted to make money, keep me in college, and pay my bills,” Roddenberry Jr. said. “We were not poor, we did not live on the streets, but in a beautiful house located in an equally beautiful area. But again, the accounts were frozen, I couldn’t pay the bills. But she never complained about it. He rolled up his sleeves and did what needed to be done. And that amazed me “, he added.

However, there are some question marks when it comes to property: who now owns Majel Barrett-Roddenberry’s voice? Her son or CBS / Paramount?

In any case, it is certain that Star Trek continues, through its legacy, to make history, inspiring, over time, many technology manufacturers, as well as the whole world, through them.