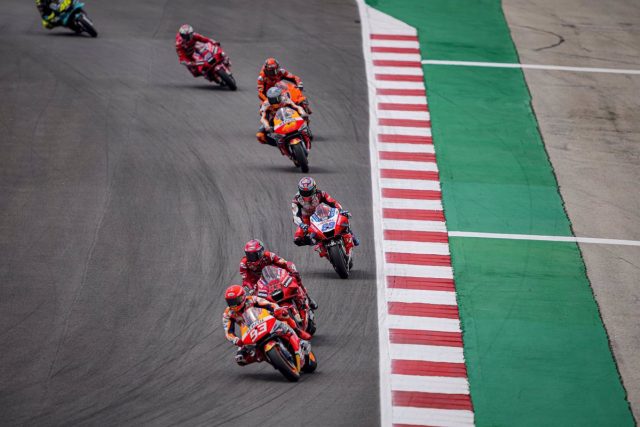 The Algarve International Circuit, in Portimao, will be the scene this weekend of the landing of the Motorcycle World Championship in Europe with the dispute of the Portuguese Grand Prix, the first stop in the five months that a championship will be quite unpredictable until now in its MotoGP category.

Between this Portuguese appointment and the Aragon Grand Prix on September 18, the grid will contest a total of twelve races on the continent, before heading for the demanding tour of Asia and Australia and returning for the traditional closing in Cheste (Valencia) .

And after four Grands Prix, two in Asia (Qatar and Indonesia) and two in America (Argentina and the United States), things are very even in MotoGP, where the Italian Enea Bastianini (Ducati) leads against all odds. Italy, for the moment, rules in the championship since Celestino Vietti, in Moto2, and Dennis Foggia, in Moto3, also lead their classifications, while on the Spanish side the best option, by distance of points, is currently Alex Rins (Suzuki) .

The Catalan is just five points behind Bastianini in the ‘queen’ category before a Portuguese Grand Prix that hopes to maintain the unpredictable script of this first section where only the top two finishers have been able to get on the podium more than once and where rain is also expected on Friday and Saturday, but not on Sunday.

In fact, the Italian has presented his candidacy for the title after winning the Grand Prix of the Americas, in what was his second victory of the season after the one achieved on the night of Lusail. However, ‘The Beast’ was not so leading in the other two rounds and his margin is not excessive, with Rins well placed with a Suzuki that is being the official bike that is performing ‘best’ in general.

The Catalan arrives in Portimao after going from less to more and chaining a third place in Termas de Río Honda and a second in the COTA. His performance is joined by that of his teammate Joan Mir, who has been in the ‘Top 6’ in all the races, with two fourths in the last two, and who showed that Hamamatsu’s bike can perform well on this track as it is third last year.

Read:  Marc Márquez: "The 25 points were possible, we left with a lot of confidence"

The Balearic is 15 points behind Bastianini and ahead of him is his compatriot Aleix Espargaró (Aprilia), who could not give the same performance in Austin as in Argentina where he added a historic victory, while Marc Márquez is much further behind ( Repsol Honda), for which things are not working out at the moment, but who showed his quality in the last race.

The eight-time world champion, who trails the ‘0’s in Indonesia and Argentina, was unable to recover much of the disadvantage in the COTA, mainly due to a problem with his Honda at the start that left him last, but once it was resolved he was able to come back to sixth place to add 21 points.

The man from Lleida, who was seventh last year in this Grand Prix, hopes to finally be in the fight for the podium and begin to recover a distance that, given what is happening, is still not too ‘worrying’. Despite everything, Márquez is being almost the best news for the Japanese brand, since Pol Espargaró, despite his great start in Qatar (third), has only been able to add seven more points to his locker, although in Austin he ran very limited by a gastroenteritis, while things are not going too well in the satellite team of Alex Márquez and Takaaki Nakagami.

The outlook is not rosy either for Yamaha or for the official Ducati team. The ‘M1’ continues not to be very competitive and the current world champion, Frenchman Fabio Quartararo, continues to suffer, although he is fifth in the championship, just 17 points behind the leader, and won last year on this stage. At Borgo Panigale, there is also concern, although the brand arrives at the Portuguese track encouraged by Jack Miller’s podium finish at the GP Las Américas and Francesco Bagnaia’s improvement.

FOGGIA AND VIETTI, TO MAINTAIN ITALIAN DOMINANCE IN MOTO3 AND MOTO2

On the other hand, in Moto3 and Moto2 the Italian leadership continues to be held by Dennis Foggia (Honda) and Celestino Vietti (Kalex) and with both managing a good lead of 16 and 14 points respectively over their main pursuers.

Foggia, current runner-up in the world, is in great shape after not starting the year well, he has a victory (Indonesia) and two second places (Argentina and the United States) to secure a candidacy on a track where he was second in 2021 and 2020 and where he was the fastest in this year’s training last February.

Behind the Italian and trying not to escape any more in this first part of the campaign is the Spaniard Sergio García Dols (GasGas), who has just added a ‘0’ in Texas. Further behind are the Italian Andrea Migno (Honda) and the also Spanish Izán Guevara (GasGas), who seconded the leader in the preseason. It will also be necessary to take into account Jaume Masiá (KTM), winner of the last test.

In Moto2, Celestino Vietti’s great start was slowed down in the last Grand Prix due to a crash that prevented him from scoring, but that was not taken advantage of by the Spanish Arón Canet (Kalex), who also left empty-handed when he had the victory and leadership in his hand.

Despite this, the Italian still manages a good lead over the Japanese Ai Ogura (Kalex) and the Italian Tony Arbolino (Kalex), second and first respectively in the COTA. The Valencian, who performed at a good level in the preseason, is at 22 points before a race where Pedro Acosta (Kalex) hopes to shine, who has not started well at all, but who was the fastest in February in the circuit where he proclaimed Moto3 world champion.