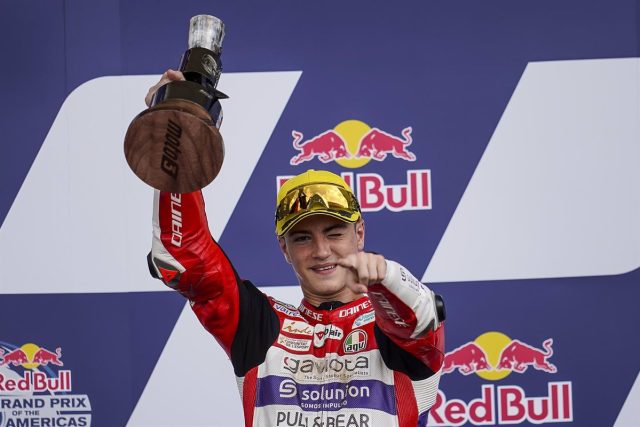 The man from Castellón and Masià complete the podium

Canet, from the operating room to second position in Moto2

The Spanish rider Izan Guevara (GasGas) has won the Moto3 race of the Spanish Grand Prix, the sixth round of the Motorcycle World Championship, with a spectacular overtaking on the last lap that has allowed him to lead the entirely Spanish podium in Jerez along with Sergio García Dols (GasGas), who is even more leader in the championship, and Jaume Masià (KTM).

With the first Spanish triplet of the course, the rider from Palma becomes the fifth different winner in six races, all after overtaking the until then leader of the race, the Turkish Deniz Öncü (KTM), in the last lap of the Jerez track.

For his part, García Dols, with his second position, consolidates himself at the head of the World Championship overall with 103 points, 21 more than the Italian Dennis Foggia (Honda), who this Sunday finished outside the points -eighteenth-, 30 more than his teammate Guevara (73) and 33 than Masià (70), who signed his third consecutive podium.

In an incident-free start at the Jerez-Ángel Nieto Circuit, the World Championship leader took the lead after overtaking his teammate and Saturday’s poleman in the first few corners. Jaume Masià (KTM), who started third, joined them to take first place a few laps later, before the dance of positions began.

Read:  Ana Carrasco: "I have shown that a woman can be competitive and win a World Cup"

The Spanish trio and the Brazilian Diogo Moreira (KTM) rode alone during the first stage, but their slowdown allowed the group to expand to six riders and later to nine, with Xavi Artigas (CFMoto) in front.

Only six -Masià, García Dols, Artigas, Guevara, the Turkish Deniz Öncü (KTM) and the Japanese Ayumu Sasaki (Husqvarna)- remained with options until the end, in which Öncü took the initiative. However, the Ottoman was surprised in the last corner by a ‘Spanish gale’ that weighed him down to fourth place.

OGURA IS PREMIERE AND CANET SIGNS A SPECTACULAR SECOND

In Moto2, the Japanese Ai Ogura (Kalex) completed a perfect race, leading from start to finish, to achieve his first victory in the World Championship ahead of the Spanish Arón Canet (Kalex), who offered a riding lesson just a few days after undergoing surgery for a wrist fracture that occurred in the fatal crash of the last Portuguese Grand Prix.

Read:  Guevara: "We have achieved the victory we achieved in Mugello"

With this, Canet continues in the fight for the championship, fourth (69), 31 points behind the Italian Celestino Vietti (Kalex), who continues to lead the general standings with 100 points despite his sixth place this Sunday in Jerez.

Ogura retained his privileged position at the start of the Andalusian event and soon took a lead of half a second over a quartet that included Arón Canet (Kalex). Meanwhile, Pedro Acosta (Kalex) and Fermín Aldeguer (Boscoscuro) said goodbye to their options when they crashed in the first section of the race.

Canet tried to follow the Japanese, who gradually increased the distance to avoid any scare and be crowned winner of the intermediate category. The man from Corbera climbed to the second podium position and the Italian Tony Arbolino (Kalex) finished third.