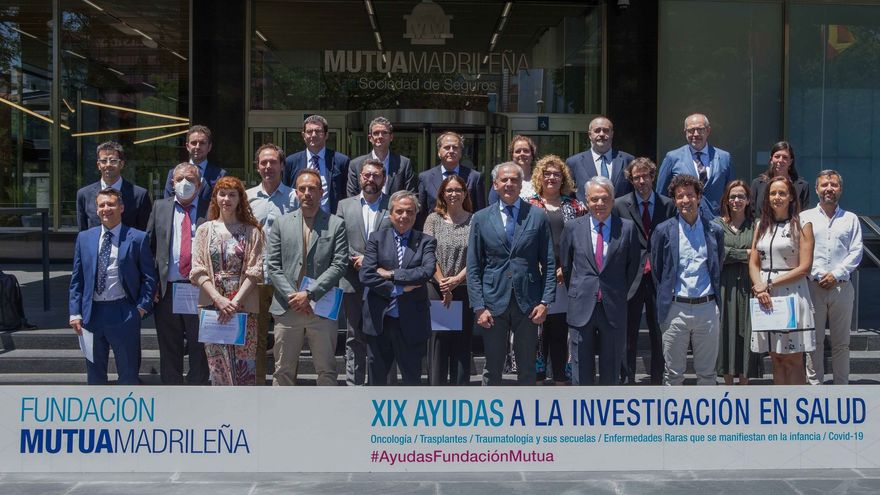 The Mutua Madrileña Foundation has awarded its XIX Health Research Grants, endowed with two million euros, to 21 clinical studies to be carried out in hospitals all over Spain and dealing with transplants, rare diseases in children, traumatology, lung cancer, and Covid-19.

The award ceremony was presided over by the Minister of Health of the Community of Madrid, Enrique Ruiz Escudero, the president of the Mutua Group and its foundation, Ignacio Garralda, and the president of the Scientific Committee of the Fundación Mutua Madrileña, Dr. Rafael Matesanz.

In total, taking into account all the hospitals that are going to participate in the collaborative projects, the Mutua Foundation will support the work of research teams from 19 hospitals in nine autonomous communities.

The research projects have been selected by the foundation’s scientific committee and will be carried out in thes areas of improvement in the organ donation for transplantation (3 studies)trauma and its sequelae (3 studies), rare diseases manifesting in childhood (6 studies), oncology focusing on lung cancer. (3 studies) and Covid-19 (3 studies). In addition, three other studies led by specialists from the medical staff of Adeslas, a leading health insurance company belonging to the Mutua Madrileña Group, will be financed.

Specifically, three of the selected projects will be carried out in. collaboration between several Spanish hospitals from different autonomous communities, two in the field of rare diseases and one in lung cancer.

Among them, the one that will be coordinated from the University Hospital of Valdecilla in Santander to test the feasibility of a potential treatment, alternative to antibiotics, for resistant infections in patients with cystic fibrosis.

In the development of this therapy, based on bacteriophages (which are viruses that kill bacteria) encapsulated with nanomedicine techniques to release them at the exact time and place in the organism, also participating will be teams of the Vall d’Hebron Hospital, in Barcelona; Reina Sofia Hospital in Cordoba; La Paz Hospital and Jimenez Diaz Foundation, both in Madrid.

Read:  What foods to avoid if you suffer from irritable bowel disease

In the field of improving the organ donation for transplantationseveral of the studies will focus on validating techniques to ensure that the organ, whatever it may be, once removed can be preserved for a longer period of time before transplantation.

By gaining this time se can better study the organ to demonstrate its viability and be able to plan the surgery, without the need to do it as immediately and urgently as until now. One of the studies, led by the Hospital Clinic-Idibaps in Barcelona in collaboration with all the teams in Catalonia, will test the preservation of the liver once it has been removed from the donor with a technique called normothermic perfusion.

With this method it has already been possible to maintain a liver for three days.The liver has been successfully repaired and transplanted into a patient at the University Hospital of Zurich, Switzerland, who is still alive after one year and was described in the journal ‘Nature Biotechnology’.

The Clinic-Idibaps study is the second in this line of the normothermic perfusion technique to be supported by the Scientific Committee of the Fundación Mutua, which in the previous call for papers had already financed one of similar characteristics at the Gregorio Marañón Hospital for all the teams in the Community of Madrid, which is currently underway.

Read:  What is miliaria, the blisters and rashes that appear on our skin in the heat?

In another line of work in the field of transplants, the lung transplant group of the Hospital Universitario Puerta de Hierro, se will conduct a clinical trial with the aim of prolonging cold ischemia time. of pulmonary grafts by preserving them at a temperature of 10 degrees.

This new modality has already been demonstrated in an international multicenter clinical trialin which this hospital also participates, that it is possible to safely increase cold ischemia of organs, allowing to improve the logistics of lung transplantation and to convert an urgent procedure into a semi-scheduled activity, which may have positive implications on both outcomes and patient safety.

In the area of oncology, which this year has focused on lung cancer, one of the studies to be funded, at the Hospital 12 de Octubre in Madrid, will develop and validate intelligent digital algorithms tofor the identification of therapeutic targets in lung cancer patients.

In the area of rare diseases, one of the studies, coordinated from the Complejo Hospitalario Universitario de Santiago de Compostela-IDIS, will use 3D printing. to improve the formulation of drugs and facilitate their intake by children affected by rare metabolic diseases.

In traumatology, and from the General Hospital of Alicante-Isabial, biomarkers associated with chronic persistent pain after total knee arthroplasty will be sought and identified to help identify patients who are going to develop this pain. after knee surgery and establish treatment protocols that reduce the occurrence of the problem.