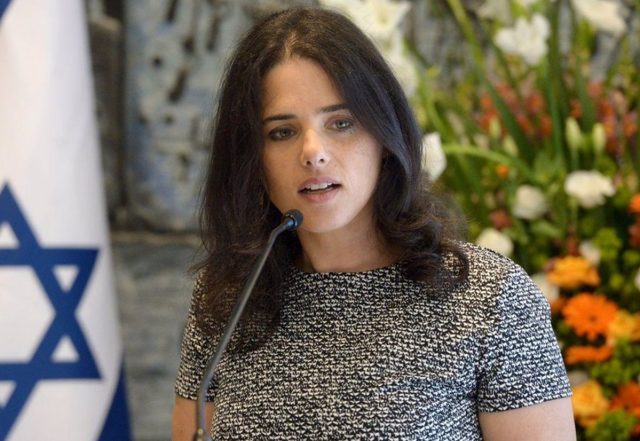 They announced this Wednesday in a Twitter post in which the two appear in a photo signing their parties’ coalition document with the following message, “With God’s help we will do it and we will come out on top.”

The merger marks the end of more than two weeks of speculation that began after Hendel and Hauser were left out of the merger between Blue and White and New Hope last July 10, ‘The Jerusalem Post’ has reported.

Standing side by side after signing the coalition agreement, the Interior Minister has said that the new alliance would work for a broad National Zionist government that includes both the Netanyahu-led Likud party and the center-left, though not the Arabs.

“Only a vote for the Zionist spirit will guarantee a broad national Zionist government,” Shaked has announced, adding that “the Israeli Executive cannot depend on an Arab party.”

Likewise, the Communication Minister, who resisted a partnership with former Prime Minister Benjamin Netanyahu in the outgoing legislature, has detailed that a “unity government” would range from Likud to the left.

“I say this very clearly before the elections: [queremos] A government that is composed of Likud and the center-left. There is no other way. In this government we have learned that the exclusion of half of the people leads to instability,” Hendel said, affirming that the Zionist Spirit will push for a unity government, according to ‘The Times of Israel’.

Shaked and Hendel helped lead the government coalition made up of eight parties from right, left, center and Arab political corners with the promise of toppling then-Prime Minister Netanyahu. Now, finally, they have decided to back down from vetoing the Likud leader.

Read:  Iraqi political groups negotiate the formation of a unity government with Sunnis, Shiites and Kurds

On the other hand, Israeli Prime Minister Yair Lapid has wished Shaked and Hendel good luck. “Congratulations to the Minister of the Interior and the Minister of Communications on the establishment of the Zionist Spirit party. We will continue to work together for the citizens of Israel,” he said via his Twitter account.

The current government assumed power in June 2021 after twelve consecutive years of Netanyahu as Israel’s prime minister. The coalition, however, is made up of eight parties spanning the entire political spectrum following a historic agreement to avoid new elections, after four elections had to be held in two years due to the inability to form majorities.