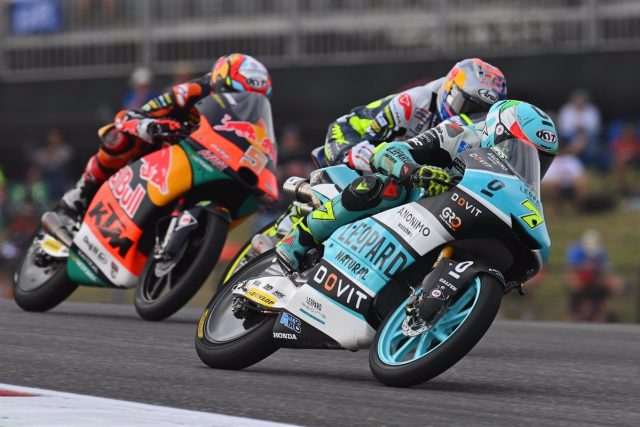 The Italian rider Dennis Foggia (Honda) achieved pole position this Saturday for the Moto 3 race of the Catalunya Grand Prix, the ninth round of the Motorcycle World Championship, and will command the front row of the grid ahead of the Turkish Deniz Oncu (KTM) and of the Spanish Izan Guevara (GasGas), while the leader of the World Championship, Sergio García Dols (GasGas), will start seventh.

The transalpine, who already dominated the last free practice sessions at the Circuit de Barcelona-Catalunya ahead of Burriana, showed his strength after one lap to lead the session ahead of the poleman of the last Italian Grand Prix and the second in the championship.

Read:  Aleix Espargaró seeks to be the leader of the house in conflict with the renewed Quartararo

Foggia, fourth overall, took command of Q2 with a time of 1:48.292 that allowed him to get ahead of the Valresa GasGas Aspar Team rider, whom Oncu overtook in the final section to take second position.

The ‘poleman’ still beat his own reference time with the clock at zero -1:48.290- and nobody managed to beat him, while Jaume Masià (KTM) and Carlos Tatay (CFMoto), fourteenth and eighteenth finally, went down when they tried to improve their times.

Guevara will start third and García Dols seventh, and they will be the only two Spaniards in the starting ‘Top 10’. For his part, Dani Holgado (KTM) will start the appointment in Montmeló from seventeenth position.

Read:  Guevara leads the Spanish Moto3 triplet; Canet, from the operating room to the podium in Moto2