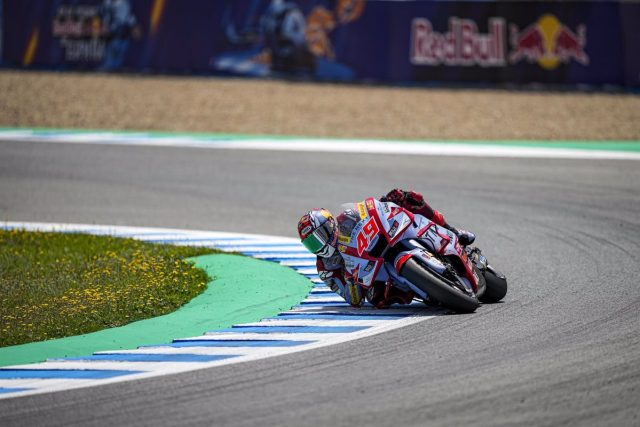 The Italian rider Fabio Di Giannantonio (Ducati) has signed pole for the MotoGP race of the Italian Grand Prix, the eighth round of the Motorcycle World Championship, ahead of his compatriots Marco Bezzecchi (Ducati) and Luca Marini (Ducati), while that the Spanish Aleix Espargaró (Aprilia) will start seventh, just behind the championship leader, the Frenchman Fabio Quartararo (Yamaha).

In a spectacular qualifying session, ‘Diggia’ achieved his pass for the final round in Q1 and set, with the clock at zero, a time of 1:46.156 which earned him his first pole position in the premier class, the sixth by a different driver this season.

For his part, Aleix Espargaró, second in the World Championship, will start on the third row of the grid, one behind the leader Quartararo, from whom he is separated by four points in the drivers’ standings. Granollers is also the first Spaniard on the grid.

With rain and lightning threatening the Mugello Circuit, Marc Márquez (Repsol Honda) tried to take advantage of his previous run through Q1 -from where he advanced with the second fastest time- to set a good time as soon as Q2 started, but he He went to the ground at the first change due to the humidity of the track and his bike ended up engulfed in flames.

All this displayed the first red flag. The session resumed minutes later with the Italian ‘Pecco’ Bagnaia (Ducati) moving up to first place in the time table, although his compatriot Fabio Di Giannantonio (Ducati), hot after passing through Q1, wasted little time in snatching the position of privilege.

Read:  Alberto Puig: "Márquez is a rider who is one step above the rest"

With three minutes to go, the Frenchman Johann Zarco (Ducati) established a 1:46.875 as a reference with which he beat ‘Diggia’, who a few seconds from the end took the lead again. The dance of positions at the head was resolved again by the Roman ‘rookie’, who with the time completed set the definitive 1:46.156 with which his first pole position in the premier class was guaranteed.

Among the Spaniards, in addition to seventh place for the oldest of the Espargaró, Pol Espargaró (Repsol Honda) will start ninth, Jorge Martin (Ducati) will do so eleventh and Márquez, twelfth.

Among those who did not advance to Q2, Joan Mir (Suzuki) will start seventeenth, Àlex Márquez (Honda) will start from eighteenth place, Àlex Rins (Suzuki) from twenty-first, Maverick Viñales (Aprilia) from twenty-fourth and Raúl Fernández (KTM), from the twenty-fifth.