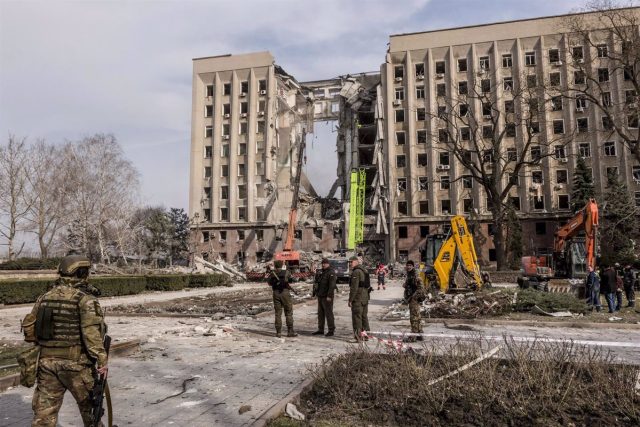 Damage to the main administrative building in the city of Mikolaiv, in Ukraine, after an attack by the Russian Army – COZZOLI/FOTOGRAMMA / ZUMA PRESS / CONTACTOPHOTO

The death toll from the attack perpetrated on Tuesday against the main administrative building in the Ukrainian city of Mikolaiv has risen to 20, as confirmed on Thursday by the State Emergency Service, which has indicated that the search work has continued during the early hours.

Read:  Lavrov denounces the "great censorship" of the Western media

The State Emergency Service in Mikolaiv has indicated through its account on the social network Facebook that “20 people have died from the impact of an enemy missile against the regional administration building”, before adding that rescuers have recovered 19 bodies at the scene, while one wounded man later died at a hospital.

Hours earlier, the agency had estimated the number of deaths at 16 and explained that “the work “continued all night to remove debris and search for people under it.” “At the moment there are 47 rescuers and nine equipment units working in the area,” he stressed.

Read:  Sweden denounces an incursion into its airspace by a Russian plane

The region’s governor, Vitali Kim, said on Tuesday that Russian troops had shelled the building and warned that the nine-story building had been seriously damaged. Thus, he specified that at the time of the attack there were between 50 and 100 people inside the building, who would have been hit by a missile. Shortly after, a fire broke out in the area.