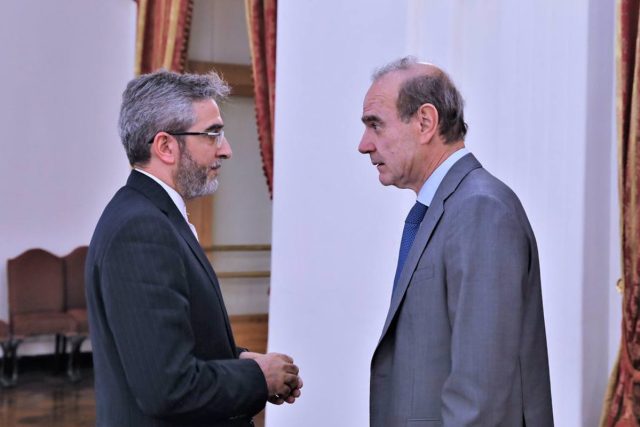 Iran’s chief negotiator, Ali Baqeri (l), in a meeting in Tehran with Enrique Mora (r), ‘number two’ of the High Representative for EU Foreign Policy, Josep Borrell, and coordinator in the negotiations on the reactivation of the nuclear deal – Iranian Foreign Ministry/ZUMA Pr / DPA

The coordinator of the European Union (EU) for the negotiations on the reactivation of the 2015 nuclear agreement with Iran, Enrique Mora, denounced this Friday having been briefly held by the German Police while making a stopover at the Frankfurt airport after his last trip to Tehran to hold meetings with the Iranian authorities.

“Retained by the German Police at the Frankfurt airport when he was on his way to Brussels from Tehran. Not a single explanation. An EU official on an official mission with a Spanish diplomatic passport,” Mora denounced in his account on the social network. Twitter. “They have taken my passport and my phones,” she added.

About an hour later, the ‘number two’ of the EU’s High Representative for Foreign Policy, Josep Borrell, confirmed that he had been released along with the EU ambassador to the United Nations headquarters in Vienna and the head of the division of the European External Action Service for Iran.

“They kept us separated. They have refused to give us any explanation about what seems to be a violation of the Vienna Convention,” Mora stressed, who has also published a message to highlight that during his trip to Tehran he asked Iran not to execute and release the Swedish-Iranian citizen Ahmed Reza Jalali.

Read:  Letta suffers his first casualty in his bid to unite Italy's center-left

For their part, European diplomatic sources consulted by Europa Press have stressed that “there is nothing to comment on” and that “the matter was quickly resolved.” “Mora continues his trip, as planned. We are in contact with the German authorities and we will not make any further comments,” they have settled.

Mora’s trip to Tehran was aimed at boosting talks for the restoration of the 2015 nuclear deal, after Iran has carried out a series of breaches in the wake of the unilateral decision of the United States to unilaterally withdraw from the pact in 2018.