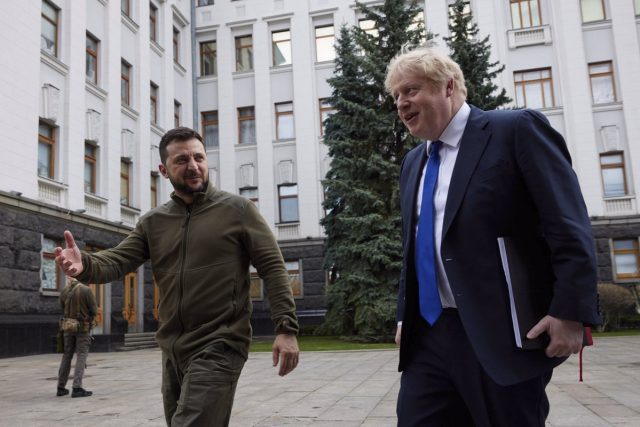 The Prime Minister of the United Kingdom, Boris Johnson, has met with the President of Ukraine, Volodimir Zelensky, in a surprise visit by the British president to the country as a gesture of support for the Ukrainian Government in its fight against the Russian invasion of the country.

“It is a privilege to be able to travel to Ukraine and meet President Zelensky in person today in kyiv,” Johnson said, according to a press release released by his cabinet. “Ukraine against all odds has pushed back the Russian forces when they were at the gates of kyiv and has achieved the greatest military feat of the 21st century,” he added.

In particular, Johnson has highlighted the “leadership of President Zelensky and the invincible heroism and courage of the Ukrainian people who have frustrated the monstrous objectives of (Vladimir) Putin.” Thus, he has expressed the “unwavering” support of the United Kingdom for Ukraine “in the long term”.

Boris Johnson surprise visits Zelenski in kyiv and both leaders surprise walking through the streets of the Ukrainian capital https://t.co/QbWEwrYauB pic.twitter.com/oqnVKNvzMj

London has also reported the shipment of 120 armored vehicles and “new anti-ship missile systems” to help the Ukrainian Army in the “new phase of Russia’s illegal assault.”

In addition, Johnson has confirmed an additional $500 million in loans to Ukraine through the World Bank, bringing the total loan amount to $1 billion.

“We are going to increase our military and economic support and forge a global alliance to end this tragedy, guaranteeing that Ukraine survives and prospers as a free and sovereign nation,” Johnson riveted from kyiv.

Zelensky, for his part, has highlighted on his Telegram channel that Johnson “is one of the strongest detractors of the Russian invasion, a leader in sanctions, the pressure for sanctions on Russia and support for the defense of Ukraine” .

“It has been more than a fruitful meeting. We are convinced that we have to put even more pressure on Russia, force it to make peace. Thank you for your effective sanctions, for strengthening Ukraine’s defensive capacity. Western democracies must follow the example of the United Kingdom. United,” he said.

The Ukrainian Embassy in London has broken the news of Johnson’s visit on Twitter with a photo of the meeting between the two leaders, accompanied by a brief message: “Surprise.”

Shortly after, Zelensky’s deputy chief of staff, Andri Sibiha, confirmed on his Facebook page that the meeting took place in the Ukrainian capital. “The UK is a leader when it comes to defense support for Ukraine,” he said.

At the same time, sources from the British Prime Minister’s Office have specified that both leaders are discussing the economic and military aid package for Ukraine announced by Johnson at a press conference on Friday.

“The prime minister has traveled to Ukraine to meet President Zelensky in person, in a show of solidarity with the Ukrainian people,” a spokesman for the office confirmed to the BBC.

This aid is worth about 100 million pounds (about 120 million euros), and includes the shipment of Starstreak anti-aircraft missiles, anti-tank missiles, precision ammunition, as well as additional helmets, bulletproof vests and night vision goggles.