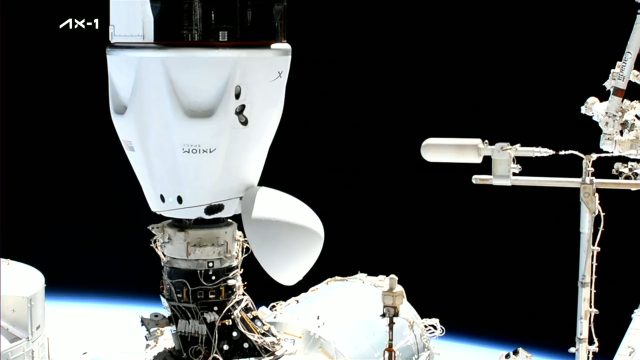 The private space company Axiom Space has for the first time sent a 100% civilian mission to the International Space Station: AX-1. The transport was provided by SpaceX, Elon Musk’s company, with the help of the Dragon capsule, which was used by NASA in the last few similar missions, which took astronauts to the station. However, the mission was not perfect, with a 45-minute delay in connecting the ISS capsule due to technical problems with the video system.

The journey of the four civilians lasted 20 hours from take-off to entry into the ISS. The crew, although officially made up of civilians, also included Michael Lopez-Alegria, a former NASA astronaut. Alongside him were businessmen Larry Connor, Eytan Stibbe and Mark Pathy. They will stay on the International Space Station for eight days and perform experiments, but they will also perform some “private” activities. When they return, their capsule will include some samples of scientific experiments, which they will hand over to NASA back on Earth.

Mainly, the AX-1 mission appears to be preparing the Space Station for other similar commercial flights. That’s because Axiom Space is preparing to attach the first private module to the ISS, which will house a sports arena and a film studio. They will be built in space attached to the ISS, but in 2028 they will be disconnected from the station, and will be attached to a new private station. In fact, in 2030 the ISS is scheduled to be decommissioned, which is to be “collapsed” under control on the planet.

# Ax1 crew welcomed by the @space_station crews as they leave Dragon and enter into their home for the next 8 days pic.twitter.com/ewgYizC2Kv

The Axiom Space movie studio on the ISS is the one where the production of a Tom Cruise movie is scheduled. However, this will not be the first film made in space and not even the first film on the ISS. A production team from Russia has already shot a large part of a film whose action takes place on the space station, on board it.

Read:  We will produce electricity at home from the moisture in the air