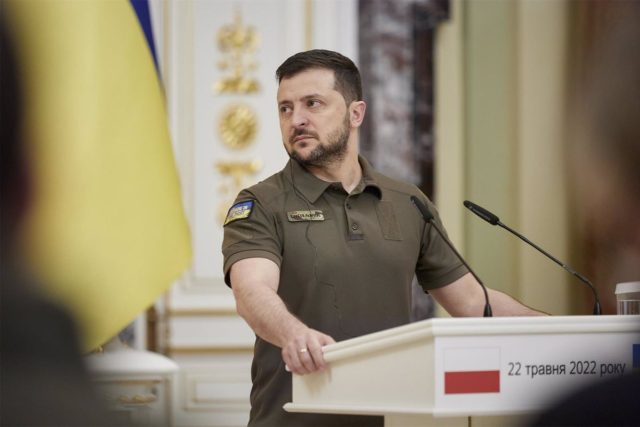 Ukraine’s Interior Minister claims that more than 20,000 war crimes have occurred in the framework of the invasion

The President of Ukraine, Volodimir Zelensky, has once again asked Western countries for heavy weapons to deal with the Russian invasion, three months after Russian President Vladimir Putin announced a “special military operation” in the country. .

“We must always remember that we have survived these three months thanks to the tens of thousands of exploits of all those who defend the state. And at the cost of tens of thousands of lives of Ukrainian men and women killed by the occupiers,” he said in his usual evening speech.

The Ukrainian president has indicated that Russia has made a “completely inadequate” statement on Tuesday about the “alleged” slowdown of the offensive in the country. “Well, after three months of searching for an explanation as to why they failed to break up Ukraine in three days, they couldn’t think of anything better than to claim that they supposedly planned it,” he added.

Read:  Maduro assures that the sanctions imposed by the US have returned "like a boomerang" to Europe and America

Zelenski has thus said that since last February 24 almost 30,000 Russian soldiers have died and more than 200 planes have been shot down. “And they want to cover it up with lies that they are not fighting at full strength? There will come a time when they will admit it themselves,” he said.

The Ukrainian president has indicated that “in the interventions of their talks”, the authorities have heard that in Moscow “they are aware” that the Russian invasion of the country “makes no sense for Russia and that, strategically, its army has no possibility”.

Zelenski has specified that the Russian troops “want to destroy everything” in Liman, Popasna, Severodonetsk and Slovyansk. “The supply of heavy weapons to Ukraine is the best investment to maintain stability in the world and prevent many serious crises that Russia is still planning or has already provoked,” he said.

Finally, the President of Ukraine mentioned the contacts he has had throughout the day on Tuesday, such as the meeting with the President of the European Council, Charles Michel, and the Canadian Prime Minister, Justin Trudeau.

“I had a meeting with the leaders of Crimea. In particular, with Tamila Tasheva, permanent representative of the President of Ukraine to the Autonomous Republic of Crimea,” he said, adding that “the Russian invasion started there.”

On the other hand, the Minister of the Interior of Ukraine, Denis Monastirskii, has indicated this Tuesday that there have been more than 20,000 war crimes, who has indicated that from Ukraine they will cooperate “with foreign prosecutors, joint investigation teams and experts”, although “Most of the work has been done by Ukrainian law enforcement officers.”

Of the total, more than 13,500 have been registered by investigators of the National Police. Monastirskii has also indicated that the priority in all the “occupied territories” is the removal of mines, according to the Unian news agency.