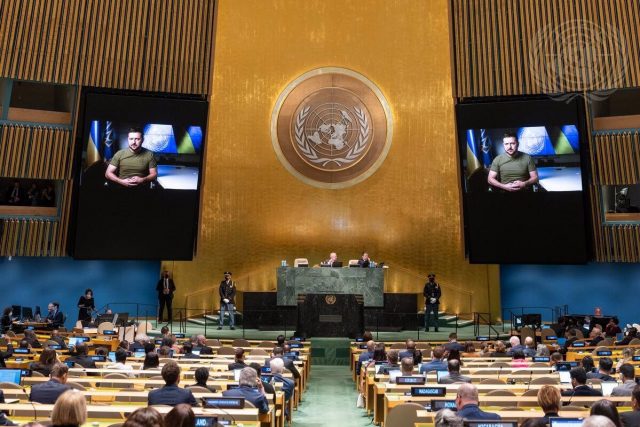 Ukrainian President Volodimir Zelensky called Wednesday before the UN General Assembly for Russia to be banned from voting in international bodies and exercising its veto in the UN Security Council, while listing “five tips” for achieving peace and security.

Zelensky has called on the international community to adopt a five-point formula for achieving peace and security, including punishment for aggression, protection of life, restoration of security and territorial integrity, security guarantees, and Ukraine’s determination to continue defending itself.

“The first point (…) As long as the aggressor is a party to decision-making in international organizations, it should be isolated from them, at least for the duration of the aggression. Refuse him the right to vote. Deprive it of delegation rights or eliminate the right of veto,” the Ukrainian president said during his speech.

In addition, Zelensky has proposed the creation of a “special court” to punish Russia for attacking a state, claiming that it would become “a signal for all potential aggressors”, as well as the creation of an international compensation mechanism for the attacked states.

In this regard, he has stressed the importance of not “turning a blind eye to propagandists who justify aggression”, but applying a package of personal restrictions, something he has described as “a punishment for lying.”

“Citizens of the aggressor state should not be allowed to enjoy tourism or shopping on the territory of those who value peace, but should be encouraged through visa restrictions to fight against the aggression of their own state,” the Ukrainian president has added.

On the other hand, the Ukrainian president gave the examples of the cities of Izium and Bucha — which were under Russian rule and then returned to the hands of Ukrainian troops — to recall “the murders” that Russian troops “are committing en masse everywhere.”

“While the sessions of the General Assembly continue, in the Ukrainian town of Izium, in the Kharkov region, the exhumation of bodies from a mass grave is in progress. Bodies of women and men, children and adults, civilians and soldiers were found there. 445 graves,” Zelensky stressed in his speech to the UN General Assembly.

In this regard, the Ukrainian head of state has urged the UN member countries to provide the states that may suffer aggression “the opportunity to protect their citizens and liberate their territory.”

“If it needs help with weapons or shells, it must be provided. If it needs financial aid, it must be given. If for this, it is necessary to help with intelligence data, just do it. But what is not necessary – lies,” Zelenski has said.

“RUSSIA IS AFRAID OF NEGOTIATIONS”

All in all, the Ukrainian president has shown his willingness to end the war by “the fast track of negotiations” through the mediation of the United Nations, although he has assured that Russia “is afraid of negotiations”.

“We have tried to accelerate it (the end of the war). We have tried to implement the basic provisions of the UN Charter for Ukraine through negotiations. But Russia is afraid of real negotiations and does not want to fulfill any just international obligations,” Zelenski has asserted.

“It lies to everyone. As is typical for the aggressors, for the
terrorists. Even now, when Russia talks about negotiations, it only wants to stop their retreat,” he added.

The Ukrainian president has maintained that Russia’s strategy in the war with his country involves waiting for winter to arrive so that it can prepare its forces and launch a “new offensive.”

“Russia wants to prepare fortifications on the occupied territory and carry out military mobilization at home,” Zelensky has pointed out.