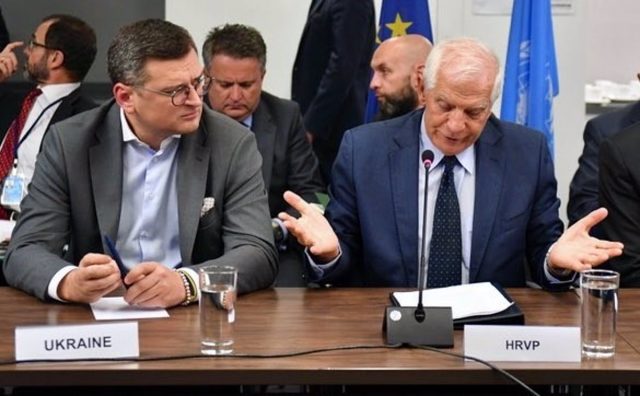 The EU-27 foreign ministers agreed early Thursday to impose new sanctions against Russia following the new escalation of tensions in the war in Ukraine, with the announcement of partial mobilization of the population, nuclear threats and referendums in the regions of Donetsk, Lugansk, Kherson and Zaporiyia.

“Additional sanctions against Russia will be put on the table immediately, as soon as possible, in coordination with our partners (…) we will study and adopt new restrictive measures, both individual and sectoral,” confirmed the EU High Representative for Foreign Policy Josep Borrell at a press conference after the extraordinary meeting of foreign ministers of the bloc on the sidelines of the UN General Assembly in New York.

As he detailed, the new package of sanctions will affect Russian economic sectors such as technology and will expand the European ‘black list’ of people who have their assets frozen in the EU and are banned from entering the Union.

In any case, it will now be the job of the EU Council to define the new measures and proceed with their formal adoption at a meeting at EU-27 level. “A few hours after Putin’s speech, it was about sending a powerful political message: this was the purpose of the Council meeting,” said Borrell.

Read:  Ukraine puts the number of children killed since the start of the war with Russia at about 360

The EU response comes on the heels of heightened tensions with Russia following Moscow’s announcement that it will call up 300,000 reservists in the Ukraine war, as well as waving the threat of a nuclear strike against the West. “It is very cynical and surprising to hear these threats during the week when at the United Nations the world community is working together to build peace and progress,” he said.

For the head of European diplomacy the mention of nuclear weapons represents an “irresponsible” attempt to undermine Europe’s support for Ukraine and endangers “on an unprecedented scale” world peace. “It will not affect our determination, our unity to support Ukraine and our full support for Ukraine’s ability to defend its territorial integrity and sovereignty, for as long as necessary,” he replied.

In a statement by the High Representative on behalf of the EU-27, the EU has recognized that Kiev is exercising the right to self-defense and fighting to regain control of its territories in the war it is waging against Russia. “It has the right to liberate the occupied areas within the framework of internationally recognized borders,” the statement said.

Read:  Ghali thanks Tunisian president for his stance on the "confusion" generated by Morocco

In this regard, the member states “salute” the courage and success of the Ukrainian forces in their counter-offensive and pledge to continue to support Kiev through the supply of military equipment “for as long as necessary.”

Russia has chosen “the path of confrontation” by announcing a partial mobilization in Russia, by supporting the organization of “illegal referendums” on Ukrainian territories currently “occupied” by Russia and by again threatening the use of weapons of mass destruction, the High Representative’s statement notes.

The EU-27 regret that, in addition to the “immense suffering” caused by Russian aggression against the Ukrainian people, Moscow has “chosen to further extend” the cost of the war also for the Russian population through partial mobilization.

The top representative of European diplomacy has called an emergency meeting of EU foreign ministers in New York on the sidelines of the UN General Assembly after Russia announced the “partial mobilization” of its reservists.