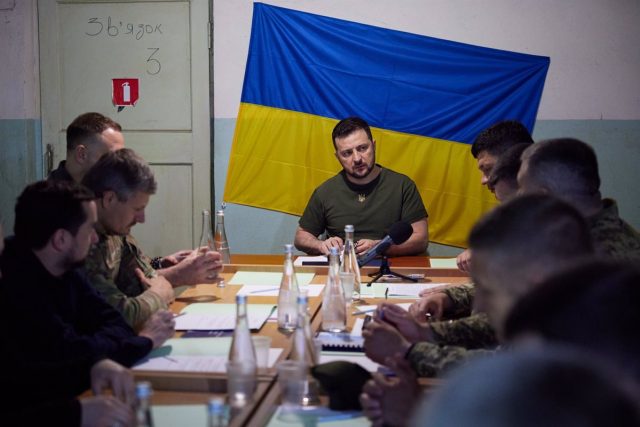 Ukrainian President Volodimir Zelenski has called on Saturday for sanctions against Russia’s nuclear industry over Moscow’s “threat” in the vicinity of the Zaporiyia power plant after Russian troops took control of it.

Russia is “trying to intimidate” people, by using the Zaporiyia nuclear power plant, Zelensky has reproached in his daily video addressed to the Ukrainian population.

“(Russian troops) organize constant provocations with shelling of the territory of the nuclear power plant and try to push their additional forces in this direction to further blackmail our state and the whole free world,” the president has denounced.

Thus, Zelensky has accused Russian troops of using this Moscow-occupied area to fire on the localities of Nikopol and Marhanez. Therefore, he warned that such actions increase “the radioactive threat to Europe to levels that did not exist even in the most difficult moments of confrontation during the Cold War”.

Read:  The right wing starts contacts in Sweden after the uncertain election result

Thus, the Ukrainian leader has urged a “harsh reaction.” “Ukrainian diplomats and representatives of partner states will do everything possible to ensure that the new sanctions against Russia will necessarily block the Russian nuclear industry,” he has indicated.

Zelensky, too, has called for those who took part in “the blackmail operation with the nuclear power plant” to answer before an international court.

“Any Russian soldier who shoots at the station or shoots under cover of the station must understand that he is becoming a special target for our intelligence, for our special services, for our army,” the leader has added.

In addition, Zelensky has welcomed the success of grain export since Kiev and Moscow reached an agreement thanks to negotiations with Turkey and the United Nations.

“Since its implementation, a total of 16 ships with grain for seven countries on three continents have left Ukrainian ports (…). On board are almost half a million tons of agricultural products,” he has specified.

Read:  Putin to pay official visit to Iran next week for meetings with Raisi and Erdogan

“This has already made it possible to reduce the severity of the food crisis and has given some hope of peace to the countries that consume our agricultural products,” he has stated before adding that exports have “significant benefits”, in turn, for Ukraine.

In this way, he has described that the three ports in charge of such exports have managed to export in less than two weeks the same volume as the entire agricultural export by road in July and more than two thirds of the export by rail last month.