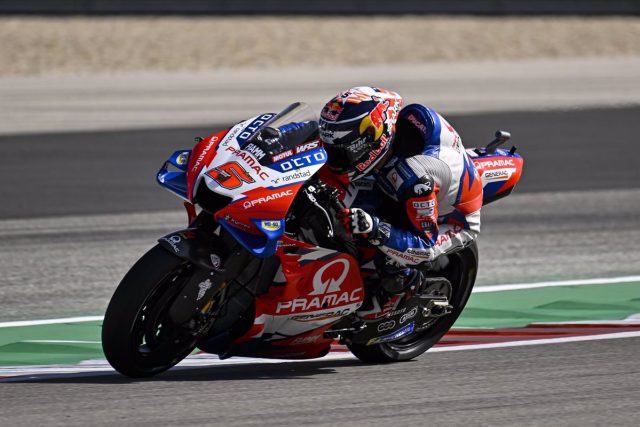 The riders Johann Zarco (Ducati), Fermín Aldeguer (Boscoscuro) and Dennis Foggia (Honda) were the fastest this Friday in free practice for the Grand Prix of the Americas, which takes place this Sunday at the Austin circuit, while Spaniard Marc Márquez achieved a remarkable sixth position after his break in Argentina due to the different injuries he has suffered recently.

In MotoGP, Zarco led the hopes of Ducati in the American rodeo with a session to remember. The Frenchman, Miller and Bastianini give wings to those from Bologna in the ‘Top 5’ of Austin, with Quartararo, Rins and Márquez leaving good feelings in their debut on the North American asphalt.

Zarco, with a great lap in the final stretch of the session, set the best time of the session (2:02.542), with which he beat by more than two tenths a Jack Miller (Ducati Lenovo Team) who had made the most of the wheel of the eighth champion Marc Márquez (Repsol Honda Team), who returned to activity with good feelings.

Read:  Aleix Espargaró: "This first part of the season has been fantastic"

The one in charge of breaking a Ducati triplet on the first day was the current champion, Fabio Quartararo (Yamaha), who was able to beat Enea Bastianini in the last breath by 47 thousandths. In addition, Ducati was also able to celebrate the presence of Francesco Bagnaia and the Spanish Jorge Martín within the top ten.

Behind the poker formed by the representatives of Ducati and Quartararo finished fifth and sixth, respectively, the Spaniards Alex Rins (Suzuki) and Marc Márquez (Repsol Honda), who was more comfortable than I imagined. The Catalan went from less to more and confirmed his recovery in one of his favorite circuits.

For his part, Fermín Aldeguer (Boscoscuro) established this Friday the best stopwatch in the Moto2 category, continuing his great performance at the Argentine GP. The Spanish rider, who turned 17 this week, forgot his incident by leading the first day of practice in Austin with a time of 2:09.155.

Read:  Marc Márquez will go through the operating room again

This record allowed him to beat Tony Arbolino (Honda) by 46 thousandths, with Cameron Beaubier (Kalex) completing the ‘podium’ of the first day in the intermediate category. The fourth fastest time went to Jake Dixon, who crashed in the morning session, while Aron Canet took fifth place after leading the session in several attempts.

The last two places in the ‘Top 10’ were shared by the Spaniards Jorge Navarro and Albert Arenas, clearly on the rise. The one who was left on the verge of making the cut was the current leader of the World Cup, Celestino Vietti, when he finished 15th in the combined.

For his part, in Moto3, the fastest was the Italian Dennis Foggia (Honda) with a time of 2:15.440 ahead of his compatriot Andrea Migno (Honda), who stopped the clock three hundredths later confirming his good feelings in the american circuit. The third place belonged to the Spanish Daniel Holgado, who surprised with a great session.