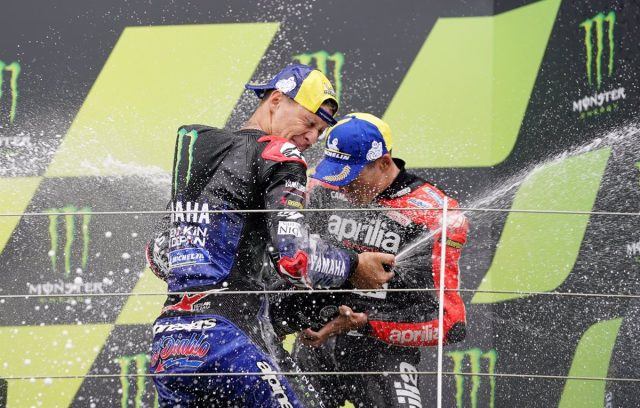 The Spanish MotoGP rider Aleix Espargaró (Aprilia) confessed to being “very happy” and “more relaxed than ever” after his first victory last Sunday achieved in Argentina, at the gates of a new appointment, the Grand Prix of the Americas, to which he arrives as leader of the World Championship and with Marc Márquez (Repsol Honda) as added difficulty to his attempt to win again.

“I am very happy, the last few days have been fantastic, very happy and relaxed, with a lot of confidence, more than in the past. In the past I dreamed of winning and now I know I can win. Last year we suffered a lot on this circuit, now there is another tarmac, the bike is better than last year’s and I want to go out there and see how fast I can go,” he said at the official press conference.

Espargaró triumphed at Termas de Río Hondo to celebrate his first MotoGP victory in his 200th race and confessed that he now feels very relaxed. “I don’t feel more pressure than before. The first victory is the most difficult, now I feel more relaxed than ever. I’m going to try to win again and get the maximum number of points”, he pointed out, before assessing the new asphalt in Austin .

“It will be totally different. What makes me happiest is that we have shown in the three races that we are competitive, I feel very good with this bike. I have been able to overtake Jorge on his Ducati, Aprilia is growing and that makes me happy. he gives a lot of positive energy. It’s not going to be easy, this weekend is a big challenge but I love challenges,” he said.

“It seems that they have done a good job, this new asphalt is fine, better than last year, we will see the grip. There will be a lot of wind, it will be something to take into account,” he added, recalling that last year he fell five times in the texan layout.

In addition, the rider from Granollers highlighted the illusion of experiencing a historic moment for Aprilia, who achieved their first victory in the premier class with him, although he could not speak of the future. “I am very proud of what we have achieved with Aprilia. We can dream of the World Championship because these riders I have here have fewer points than me and they also dream, it will be difficult but it is magnificent. I would like to continue for two more years, but not only It’s up to me. I’d love to compete on the bike too at some point,” he said.

Read:  Joan Mir: "Not being in the fight for the World Cup would be taking a step back"

“Winning is special. I don’t like this question. I already know that Marc is one of the best drivers in history, especially here in the United States, but the rest are still very strong. I’m happy that Marc is back, not because the World Cup, for him personally, for what has happened to him in the last year. If it was already difficult to win before, now it is more so, but the best riders are here,” he added about Márquez’s return.