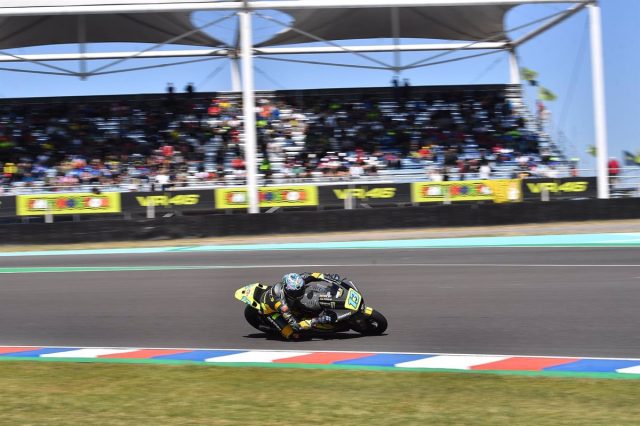 The Italian driver Celestino Vietti (Mooney VR46 Racing Team) took victory in the Argentine Grand Prix, the third round of the World Championship, in a bumpy race for Spanish interests and also elusive for an Arón Canet (Flexbox HP40) who brushed the podium .

The leader of the World Championship showed that he is serious and took his second victory of the season, third podium, after winning the opening round in Qatar. Vietti rode the second half of the race in the lead, in conflict with the Thai Somkiat Chantra (Honda), who was also looking for his second victory after the one in Indonesia.

Read:  Pol Espargaró: "The bike continues to improve and the future is promising"

Vietti endured the hand in hand that left the fall of the Spanish Fermín Aldeguer, who on Saturday had signed the youngest pole position in Moto2 history. The Murcian went to the ground, in a tremendous fall, closed by the Italian in a curve, 16 laps from the end and fighting for the first podium of his life.

The Spaniard Augusto Fernández also fell at the start. The Red Bull KTM Ajo rider was the other great Spanish asset for the Termas de Río Hondo circuit, but a poor start caused him to fail in the first corner. Meanwhile, Aron Canet came back from the start to follow in the wake of the leading group, finally in the fight to be third.

The one from Corbera took a chance on the last lap with the Japanese Ai Ogura and the Asian rider gave Honda the double, second Chantra, holding off two overtaking by Canet heading for the checkered flag. Also Spanish Pedro Acosta (Red Bull KTM) and Albert Arenas (Inde GASGAS Aspar Team) finished seventh and eighth.