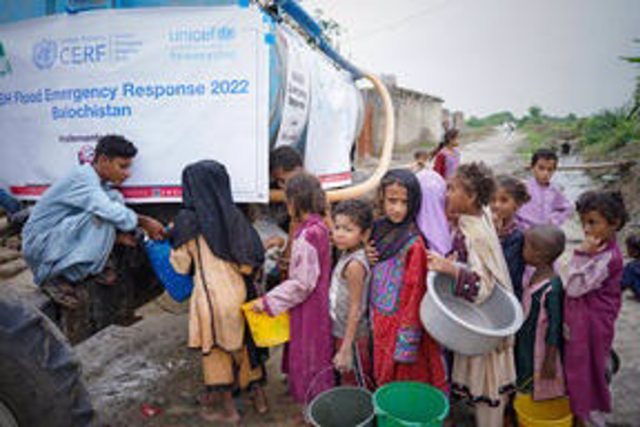 The United Nations Children’s Fund (UNICEF) has warned Thursday that more than 500 children have died as a result of the floods that have been ravaging Pakistan for months.

“Catastrophic floods in Pakistan have claimed the lives of at least 528 children, according to the latest government figures. Each and every one of these deaths is a tragedy that could have been prevented,” said UNICEF country representative Abudla Fadil after visiting the province of Sind.

The organization stressed that, “the sad reality is that without a massive increase in aid, many more children will lose their lives,” and urged the international community to provide resources to the country.

“I have been in flood-affected areas for the past two days. The situation of the families is beyond heartbreaking, and the stories I have heard paint a desperate picture. All of us on the ground see malnourished children, struggling with diarrhea, malaria and dengue fever, while many others have painful skin conditions, Fadil has detailed.

Read:  Russia clarifies that the attack in front of its embassy in Afghanistan will not affect diplomatic relations

“Many of the mothers are anemic and malnourished, and have very low birth weight babies. Mothers are exhausted or sick and can’t breastfeed. Millions of families have been forced from their homes and are now living with little more than rags to protect them from the scorching sun, as temperatures in some areas exceed 40 degrees Celsius,” he added.

UNICEF has lamented that many families have been forced to seek shelter on higher ground, often next to roads that put children at risk, as the lower lands are covered by huge expanses of stagnant water and stretching “as far as the eye can see”.

Likewise, the number of children lost in these floods continues to grow, according to UNICEF, which announced that it is doing “everything possible” to support affected children and their families, as well as to protect them from the “continuing dangers” of waterborne diseases, malnutrition and protection risks.

Read:  Rescue of ten miners trapped in a landslide in Mexico progresses

The organization has qualified that the aid needs “are enormous” and stressed the importance of the international community’s response being “equal to the challenge.” A third round of critical UNICEF medical and humanitarian supplies (an additional 36 metric tons) is on its way to Pakistan and is expected to arrive in the coming days.

“Pakistan’s children are paying the price for a climate disaster they did not cause. As we respond to their urgent needs today, we must also begin to look to the months ahead and the need to rebuild the lives of these millions of vulnerable children, to ensure they are safe, healthy, well-fed, learning and preparing for their future,” concluded Fadil.