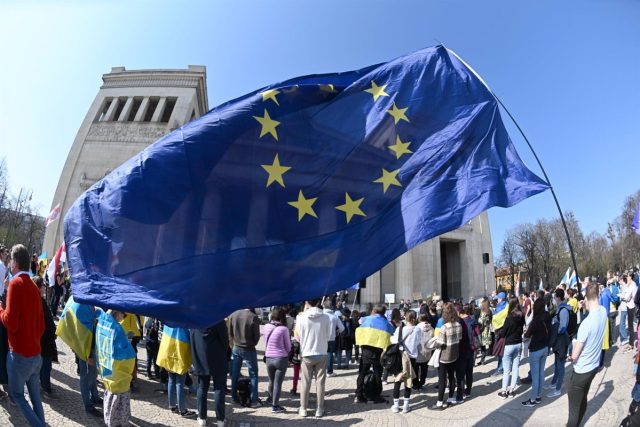 A flag of the European Union during a demonstration in support of Ukraine. – Felix Horhager/dpa

Deputy Prime Minister for European and Euro-Atlantic Integration Olga Stefanishina has expressed her hope that in June 2022, at the summit of European Union leaders, Ukraine can become a candidate for membership.

“We hope that at the summit of European Union leaders in June this year, Ukraine will become a candidate for membership, and this process will open up new political horizons for us, but above all financial horizons,” he said, according to the report. Interfax news agency.

In fact, the president of the European Commission, Ursula von der Leyen, has promised this Friday from kyiv, where she has met with the president, Volodimir Zelenski, to speed up the country’s accession to the European Union.

“We are going to speed up this process as much as we can, while guaranteeing that all the conditions are respected,” Von der Leyen assured after handing the Ukrainian president the accession questionnaire.

This document is the centerpiece of the opinion prepared by the European Executive to give its opinion on the options of a candidate country to access the community club. “This is where the road to the EU begins. We will be at your disposal 24 hours a day, seven days a week to work with this common base,” he told the Ukrainian president.

The lengthy enlargement process is not the only obstacle to Ukraine’s aspiration to fast-track entry, as there are member states within the EU that are reluctant to streamline merit-based procedures.

Another element in the equation is the situation of the Balkan countries, which have been embarking on the process of joining the EU for more than a decade and with no sign of being able to access the bloc in the short term.

PARTICIPATION IN THE OSCE

On the other hand, due to the latest attack on a train station in the city of Kramatorsk, the Ukrainian Foreign Minister, Dimitro Kuleba, has assured on his official Twitter profile that “Russia’s unjustified aggression and atrocities have destroyed the foundations of of the Helsinki Final Act”.

This week, the OSCE Special Monitoring Mission (SMM) in Ukraine has completed the temporary evacuation of all its international members, according to a statement posted on the organization’s website.

With the completion of this temporary evacuation, information activities are suspended, but facilities and assets are preserved in anticipation of a return to operations in Ukraine.